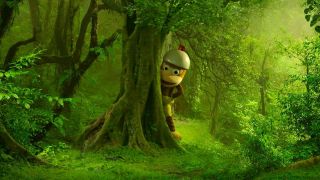 It's been 20 years since an ape named Specter tried to rewrite history with an army of apes sent back in time in the original Ape Escape on Playstation. Now, after three sequels and a number of years since we've had a new release in the platforming franchise, we could be getting a new game.

Eurogamer originally reported that Twitter account @piposaru20th, which only popped up earlier in June, has been tweeting cryptic messages about whether anyone is still chasing the apes who escaped. It's an unverified account, so it could be nothing at all, but Sony Entertainment Japan's Japan Studios official account  starting following them recently. They only follow 53 accounts on Twitter, so that's something to consider.

A new Ape Escape would join a number of other titles in a classic 3D platformer resurgence that has taken place over the last few years. We've seen Yooka-Laylee, A Hat in Time, Mario Odyssey, and upcoming games like the remake of SpongeBob SquarePants: The Battle for Bikini Bottom reinvigorate the nostalgic love for running, jumping, and exploring.

The Japanese Ape Escape website was also updated for the first time in eight years back in April, so all clues are pointing to more Ape Escape. If a new game is coming we don't know if it's a remake of one of the original games or something new altogether. Either would be welcome.

Looking to revisit some other platformers after hearing about the possible return of Ape Escape? Check out the best platform games ever (that aren't Mario).