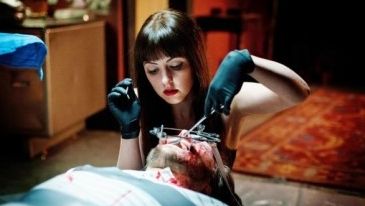 Rape-revenge is the most morally dubious of genres, often made by those more interested in filming the former than dealing with its fallout.

Some theorists even compound the crime by calling the likes of 1978’s leery I Spit On Your Grave “feminist” because they show a woman fighting back.

Though it loosely follows the formula, American Mary is one of the first such films that can legitimately lay claim to that label.

Made by writer/director sisters Jen and Sylvia Soska – aka “The Twisted Twins” – and starring the formidable Katharine Isabelle ( Ginger Snaps , Freddy Vs Jason ), it’s a film that’s not about humiliation, but empowerment.

Mary Mason (Isabelle) is a promising surgery student who stitches turkeys back together in her spare time.

Auditioning as a stripper to make ends meet, she’s called upon by club owner Billy (Antonio Cupo) to fix up a torture victim, and soon becomes a kind of black-market saw-bones for mobsters, misfits and body-modification addicts such as Beatress (Tristan Risk), who wants to turn herself into a kind of living doll.

Then things get really twisted. With her sheer black hair, bright red lipstick and ice-cool demeanour, Mary is a kickass heroine, and when her path leads her into sexual violence, we never abandon her POV for a moment.

This is a character who refuses to be turned into a victim – or worse, an object – and the film follows her lead, opening up all sorts of debates on how women might flip the tables on men, reclaiming themselves, and their bodies, from becoming prisoners of patriarchy.

True, amateurish supporting performances, a too-loose last act and other low-budget complaints threaten to turn the film from five-star classic to three-star contender.

But it’s still a hell of a mission statement from the Soskas: sensitive, shocking and funny as hell.

Besides, stitching two disparate halves together seems wholly appropriate under the circumstances.