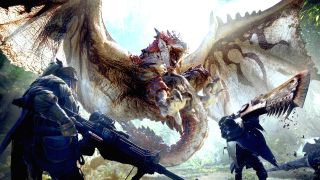 I used to think I was pretty good at Monster Hunter World. And after 40 hours’ play – enough time to completely finish at least two, relatively large, full-sized AAA games – I had every right to think that. Hell, I was good. My whole squad was. We had good gear, we knew how to use it, we coordinated well in combat, and we put serious thought into the ongoing direction of our armour and weapon builds. We were entirely on-point.

But then we reached High Rank, and it turned out that Monster Hunter World couldn’t give a fuck about any of that. Monster Hunter, in fact, had been trolling us the whole damn time, giving us the impression that we had power and control, while secretly chuckling at our fragile, childlike weakness. It was letting us build ourselves up while quietly getting ready to strike us down, and then move the goalposts several miles beyond our current position the instant we got to our feet. Much like the scheming machines in The Matrix, or the basic framework of late-stage Capitalism.

Where Monster Hunter World differs from the real world though, is that for all of its harsh treatment and blunt lessons, it actually wants everyone to succeed. Its teaching methods might be akin to pulling an armband-wearing toddler out of a training pool and dumping them into the Pacific, but it ultimately wants its kiddywink Hunters to swim, not sink. And it provides a great motivator. That motivator is the Bazelgeuse. The Bazelgeuse is the shark in the ocean behind the child, and I both love and hate it with every atom of my being. But I’ll come onto its vile-beautiful influence once I’ve explained the grotesquely bigger picture through which it plies its dark trade.

When you hit High Rank in Monster Hunter World – which kicks in after a couple of special missions at Hunter Rank 11, and takes between 30 and 50 hours to reach – it rapidly becomes apparent that all that has come before, all that you fought so hard for, discovered, won, bemoaned and celebrated, was a tutorial. Surprise, noob! You didn’t think that 50-hour campaign of thundering challenge and dizzying RPG depth was the game, did you? Oh sweet, blessed child. How naïve you were. That was all just to get you warmed up to the most basic idea of the game. Now wind your neck in, take the training wheels off, and learn some real stuff, you big dumb baby.

When you hit High Rank, you’ll find that, thanks to a drastic difficulty jump, all of your current armour is largely useless. Carrying on using it is like trying to do a coast-to-coast roadtrip on your childhood tricycle. However hard you pedal, it’ll take you ages to get anywhere, and you’re still going to end up dead in the middle of a desert. And because the perk load-outs between equivalent Low and High Rank sets aren’t even remotely similar - and neither, for that matter, is the actual perk system itself – simply rebuilding your beloved old gear is no kind of an option. Having thought yourself the toppest of dogs, you are now kicked out into the wilderness, cold and almost literally naked, and Monster Hunter is laughing its ass off at your disgusting shrivelled bits. God, you’re a mess.

The new armour progression system will allow you to create super-powered suites of skills that feel game-breaking compared to the limits Low Rank let you believe were actually real - you saw the sky, but Monster Hunter saw a painted ceiling, as it laughed at you from its glistening tower in space like a mad-faced Bond villain - but you’ll have to grind like crazy to acquire the perks you need.

And that’s on top of grinding for the armour in the first place. And wrangling the stack of new systems, economies, services, and rock-hard monster sub-species. And layers upon layers of new weapon development trees that make the power and functionality of your trusty, Low Rank beast-whackers look like AHAHAHAHAHHAHAHA! Oh my god, I’m sorry, I couldn’t even finish that sentence, so funny is the comparison now that I think about it. And as the conceptual earthquake kicks in, all the guidance disappears. There is only one objective: do stuff and get better.

And amongst all of this, stalking the land like the dread, physical personification of High Rank Monster Hunter’s brutal and unapologetic step up, is the Bazelgeuse.

I’d been warned about it by squad members who had reached High Rank ahead of me. They had discussed it in hushed, nervous, giggling tones. They had referenced the Predator. They had referenced Resident Evil 3’s Nemesis. They had told me of a new beast, unlike any I had experienced before, that would turn up out of nowhere whenever it damn well liked, with the sole, almost honourably-focused purpose of fucking my shit right up. It was death. It was the walking, stalking essence of the very idea of ‘NO GODDAMN NO’. And then one day, during my first, High Rank, co-op hunt, I met it.

The moment now flaps and screeches about my memory like a bad dream. I had moved in on a Pukei Pukei, chasing it up onto a small ledge in order to pin it down with some hammer stuns while my friend Mark held back to put some team buffs down. I neared the middle of my second combo, and then the whole world went black. The jungle disappeared, and all at once became leather, teeth, and claws. The jaunty murder-music of hammer-strike upon Pukei skull melted away, its straining dregs buried under a cacophony of everything and nothing at the same time. Somewhere, faintly, like a whispering voice from outside of space and time, I heard Mark explain “Er, Dave, that’s, er…”

I know, Mark. I fucking know.

We escaped that fight, barely. I leapt and ran, never looking back until the shrieking had stopped. I eventually collapsed into a woodland clearing, realising I still had no idea of what my attacker had really looked like. There was an emotional imprint of its shape on my mind, but the emotion was simply ‘NYEEURGH’, and the shape was… spikey. Later, I saw it, and the sight was not reassuring.

The Bazelgeuse is a gigantic, black and gold dragon-bird, twice the size of the biggest thing you can imagine and exactly as fast as something that large shouldn’t be. It can shed its scales, which then act as bombs or landmines. It can breathe fire. It can appear to have flown away, only to vertically dive-bomb you out of literally nowhere. But none of the details really matter. What matters is what the Bazelgeuse does, what it is, and what it represents. What it does is kill you. What it is is a huge, terrifying asshole, of the type even our most ludicrously hardcore, series-stalwart hunter currently runs away from. What it represents though, is growth and aspiration.

Because while other monsters, however big, upgraded, fast or powerful they might be, inspire research, strategy, co-operative planning, and action, the Bazelgeuse currently inspires a void of proactivity. To conceive of fighting it is to imagine roundhousing God. It is an impossible creature. Its existence is not even an option. Yet it exists. And so, eventually, there must be a way to hunt it. The clue is in the name of the game.

And so, out of fear and desperation, you will try to find a way. You will have to. Because the Bazelgeuse will always be there. There’s no specific way of triggering its arrival – which is a shame, because if there was then you could dedicate your whole life to Not Doing That Thing – but it tends to muscle in when you’re busy fighting another large monster, meaning that every important task, everything you absolutely have to do to prove yourself in High Rank, happens under its shadow.

As such, for all of High Rank Monster Hunter’s expansions and escalations, for all of the extra depth, the extended progress path, and the new possibilities, it is the Bazelgeuse that really makes this next stage of the journey real. Whatever you achieve here, none of it will completely count while you’re still scared of the Bazel. So you’ll have to engage with every High Rank system and possibility in order to, eventually, work out how to deal with it.

If Monster Hunter World’s High Rank play simply made the normal monsters tougher and unlocked its new gear options, there would be questionable drive to fully explore. The game’s pacing might even collapse, in fact. Being told, after 50 hours and an ‘ending’ cutscene, to do a whole lot more under tougher circumstances, would be demoralising to a lot of players. And many would (naively) feel they had no more to prove. Even if they had an idea of how much deeper the game went, they might not feel compelled to spelunk the rabbit hole. But with the Bazelguese in the sky, all that changes.

The sense that there’s more to learn and master becomes tangible, because the beast directly affronts your sense of previous accomplishment with the same brutal indifference that the game’s expanding systems do. By rudely kicking over the sandcastle of all that you’ve thus-far built, and personifying that notion in the Bazel, Monster Hunter baits you into sticking around and digging deep. Thought you were good enough? You weren’t, and this monster is going to bully you with that knowledge until you are.

It’s a benevolent action, of course. High Rank Monster Hunter is a fantastic, rewarding, long-term experience, as mentally gratifying as it is exciting as an action game. Low Rank is great as well, of course. But to really get the best out of Monster Hunter, you need to commit to a career. You need to accept obsession. And the Bazelgeuse puts a face on that obsession. It is both your carrot and your stick. It is your abstract destination, and the place you’re running away from. It is your Moby Dick, and also just a total dick. You will have to destroy it, one day. But between then and now, you’ll have to play Monster Hunter World on a whole new level.

Enjoy your time, Bazelgeuse. I respect you and everything you stand for, but eventually I’m going to tear off your head and wear it as a hat. I’m not close to doing that yet. I’m nowhere near close. But amid High Rank’s abstract push for self-improvement, you give me specific purpose, and a waypoint on my map. And I love you for that. After all, as in Monster Hunter as in life, you need to know exactly how much you don’t know if you’re ever going to really learn.