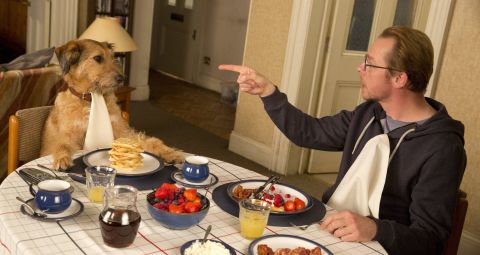 Pegg works wonders, but you’ll wish the concept had been pushed further, that there was more to the Pythons’ ‘reunion’ – and that Robin Williams had found a funnier swansong.

It’s a lesson played out with glee in Terry Jones’ charmingly silly Britcom, but one the Monty Python veteran should perhaps should have heeded himself: with a fantastically talented supported cast at his disposal, the director neglects his duty to set them free to allow them to create something far funnier.

Semi-delivering on its promise of reuniting the Pythons on screen, Absolutely Anything has them voicing the cartoonishly CGI-ed Intergalactic Council: a group of bickering aliens who set out to determine the worthiness of the human race by granting one randomly chosen person the power to make anything they wish come true. If they use this ability for good, Earth can join the ranks of the Council; but if the power is used selfishly, the planet will be destroyed.

And so it falls to Pegg’s hapless loner Neil Clarke to unwittingly decide the fate of humankind, something that seems far less secure once Neil discovers his new gift and immediately uses it to get closer to his neighbour Catherine (Kate Beckinsale) – and to give his dog Dennis the voice of Robin Williams.

There’s fun to be had watching Neil bumble his way through the unfortunate consequences of his magical mischief – not least when his wishes end up being interpreted slightly too literally (“Give me the body of a great man,” Neil says, shortly before transforming into... Albert Einstein). Throughout, Pegg is on fine form, with exaggerated reactions and comic exasperation all dialled up to levels that meet the film’s audaciously absurd plot.

Sadly, while Beckinsale is commendably committed as Neil’s bemused love interest, other big-name co-stars get short thrift. Robin Williams in particular – with this being sold as his final film, it’s sad to see a comic genius end his career with more of a good-hearted chuckle than an uproarious belly laugh.

Voicing Neil’s suddenly cognizant and articulate pooch Dennis, Williams offers some of the best scenes, but it always feels like the great improviser is being forced to stick to the script rather than being allowed off the leash (so to speak). As such, it’s all on Pegg and his goofy charisma to keep things moving. He may not be omnipotent, but he’s gifted enough to save the day.

Pegg works wonders, but you’ll wish the concept had been pushed further, that there was more to the Pythons’ ‘reunion’ – and that Robin Williams had found a funnier swansong.