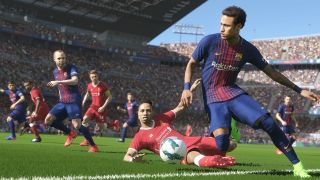 I’ve been hands-on with PES 2018, and it’s impressive. Highly impressive. Yet closed-mindedness among the sports-gaming community means that, for many, those opening nine words might as well be written in Cyrillic. FIFA fans insist PES is awful. PES fans do the same in reverse. On this merry-go-round of tedium trundles, year after year, completely ignoring the salient point: right now, both football games are really bloody good.

FIFA 17 was my personal choice last year, with over 650 matches clocked up in Ultimate Team. Yet GR+ global editor-in-chief Dan Dawkins was so bewitched by PES 2018 during a recent E3 hands-on that it scored a Game Of The Show gong, and we’re united in the view that it’s going to be an exciting season for footy games - especially now that I too have tested Konami’s latest. Does it have a genuine shot at stealing the 2017/18 title spoils? Absolutely, and below are seven key reasons why.

Signing of Usain Bolt aside – which brand manager Adam Bhatti tells me came about through a chance meeting between a Konami rep and Bolt’s agent at a sporting event – PES’ entire ethos remains noticeably gimmick-free. Its team speaks passionately about footballing fundamentals above all else: variation in shooting. Creating a sense of space around your player, and the ball, when dribbling. Getting the feel of set pieces right, and so on.

Improvements in all of the above areas make my hands-on a delight – and Dan’s E3 piece elaborates further – but it’s midfield play which has metamorphosed to the greatest degree. For one, the game as a whole has been slowed down, literally giving you more time on the ball, but the sensation of freedom is enhanced by the decision to make the pitch bigger, and players smaller. Barcelona are kings of ball retention, as ever, but even with Dortmund and Liverpool there’s minimal breathlessness when trying to retain possession in the centre circle, or work the ball around in expectation of a defence-slitting run.

I’d go so far as to say zipping passes across PES’s carpet-like surfaces is almost soothing – though there are still multiple ways to unlock a defence, and I have success with two deep Dortmund crosses (both headed home by Marco Reus) late in the day too.

2. Keepers are a talking point – for the right reasons

PES’s history is, rather infamously, littered with questionable netminders – or, as they were known for many years in the GR+ office, ‘Captain Panhands’. In my hands-on I note the odd mistake, including a Luis Suarez pea-roller that squirms through the grasp of Roman Burki, but they’re offset by acrobatic saves of all types: just-inside-the-post shots powerfully fisted towards the corner flag, downward headers desperately batted away, even the odd feet-first block when there isn’t time to dive for a low ball. The variety, even in a single day’s play, is very encouraging.

“They keep you guessing,” says Bhatti of the in-game goalies. “Sometimes you’re able to score through their legs from a weird angle, sometimes not. Sometimes they’ll do something crazy, other times they’ll save a shot out of the blue. For me the magic of ‘classic’ PES was that sense that you could shoot from anywhere and anything could happen. It’s a bold claim, but I don’t think we have any ‘sweet spots’ from which you can always score in PES 2018.”

3. There's an emphasis on gameflow over realistic foul counts

One noteworthy feature of my hands-on, against both AI and human teams, is that games speed by. Aside from corners and throw-ins there are precious few stoppages, with referees keen to let the game flow. 50-50 – occasionally even 70-30 – challenges which might be fouls in real life are sometimes let go. For many fans that was a controversial call in PES 2017, and will likely remain so here. Bhatti reveals that he’s even had critics send him detailed stats for the number of fouls given in a 90-minute match. Yet the team has resisted calls to make wholesale changes, with good reason.

“It’s so difficult,” he explains. “In 2018, the AI is more physical, and teams who press high will also clip you now and again. We’re also working on the AI being imperfect in terms of tackling. That creates fouls here and there, but there has to be balance. This is not a 90-minute game; it’s a 10-minute match. Real-life foul numbers would make for a stop-start experience.”

4. Detail is becoming a key element of PES' NDA

It takes exactly three minutes for PES 2018 to produce my first ‘WTAF?!” moment, as pre-match scenes showcase an aerial daytime view of Camp Nou which is – I swear to you this isn’t hyperbole – staggering. It’s not merely the stadium detail that wows, but the city in the backdrop too, its high rises and compact streets like something out of a ‘Visit Catalunya’ newspaper supplement. MLB The Show and NBA have set the standard in this area in recent years, and while gameplay is paramount, those intricacies do matter. Big tick there.

Similarly, player faces remain a determining factor for many, and some of PES 2018’s newbies can be seen below. Neither football game had Mbappe last year, so his likeness alone is a huge deal, and 90% of the real faces look immaculate in-game. One surprising outlier given the series’ ties to Barca is Luis Suarez – something about his likeness just feels off, and it wouldn’t surprise me to see him updated mid-season. Though FIFA’s faces are by no means faultless either, as anyone who deployed Casemiro in Ultimate Team for 17 will attest.

Asked @Adam_Bhatti about new player faces in PES 2018. Better than a verbal answer, he flashed this at me from his laptop: pic.twitter.com/7335yyTZRuJune 21, 2017

5. Its online beta is being taken extremely seriously

For all PES’s recent brilliance, the elephant it can’t shift from its development studios is online.

There can be no doubt that FIFA has outperformed PES in this regard across the last two seasons, yet Konami is firing back: the addition of 2-on-2 and 3-on-3 co-op is an especially tantalising prospect. Even more important are robust foundations for net-based play, with Bhatti pinpointing next month’s unprecedented online beta as the key to setting things right.

An inside look at the PES World Finals, where one teenager walked away with $200K

“I can’t talk about online improvements right now,” says Bhatti, “but I want everyone to focus on supporting us with the online beta, which launches on July 20. This isn’t a marketing tool. It’s a way to get you guys playing, so we can get data [to improve PES 2018]. Across PS4 and Xbox One we’ll utilise those results [to fulfil] our intention – which is stable online for day one.”

6. Master League sounds ace – now we need to play it

Few modes are as revered within sports gaming as Master League, thanks to Pro Evo’s PS2 years making household names out of fictional sporting heroes such as Ximenes and Valery. Konami has worked hard to recapture that magic, with surgical attention paid to its transfer system – and one wrinkle of it in particular.

“My favourite Master League feature is the addition of release clauses,” reveals Bhatti .”Now if a club rejects your bid for a player, you can get an option to pay the release clause – if you have enough money. So your bid might be turned down at £20m, but you can then trigger that player’s release clause at £50m. That’s exactly how Higuain went from Napoli to Juventus, and it’s cool to have it in PES.”

Other ML changes include pre-season friendlies and enhanced presentation elements, but judgement on those will have to wait until a later date – the mode isn’t playable as yet.

7. Konami doesn't shy away from the rivalry talk

While most gamers make a straightforward choice between PES and FIFA each September, success isn’t so binary for Bhatti’s team: “I constantly get asked, are you ever going to beat FIFA? But we’ve been here for more than 20 years. We’re doing okay, you know? This is a business, and if PES wasn’t making money, we wouldn’t be here. We’re going for realism and simulation, to win hearts and minds.”

Both FIFA and PES are often accused of copying one another, yet Bhatti says the opposite is true, with Konami’s game trying to find niches that aren’t necessarily offered by its “juggernaut” of a rival. “One thing our competitor does really well is presentation, for instance with their licenses,” he admits. “But a lot of that wouldn’t mean anything if the game didn’t look great, or move great. With PES 2018, I feel like we’ve really focussed on those elements, to make you feel like you’re lost in [the game’s atmosphere]. You then layer the gameplay within that: rhythmic, individualistic dribbling; ball physics; the feel of teams and their individual tactics; and so on.”

No question, Bhatti talks an accomplished game. Beautiful, you might say. The challenge now is to make sure PES 2018 continues to play like one – particularly over the internet – proving the old adage that you never write off an underdog.