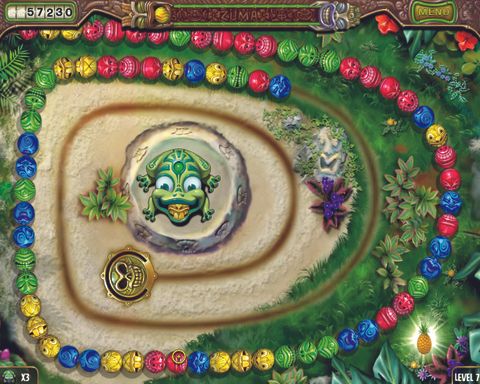 It doesn’t seem to be possible for PopCap to release a bad game. Sure, they’ve had a few partial misses in the past, but since Peggle exploded, they’ve just nailed that treble 20 each time. Zuma’s Revenge is just the next game off their conveyor belt of fiendishly addictive, quality casual titles. It’s also safe to say, though, that it doesn’t have that all-encompassing joy factor that Peggle delivered, as, surprisingly, it’s a little bit user-unfriendly.

The premise is that your hero, a frog, is shipwrecked on a monster-infected Hawaii-like island and, in his attempts to explore his surroundings, has to do battle with the denizens of the jungle. There are lots of mentions of the word Tiki, too, which is always nice.

His battles take the form of long ribbons of coloured balls that snake along a track towards a gaping maw of death. You have to stop said balls disappearing into the demonic gullet by firing additional spheres into the snake. It’s a twist on the match-3 games like Bejeweled, just not on a grid. The key is to make sure you don’t fire too many in at once, as each addition extends the line by one, inching it ever closer to destruction. Chain matches together for big points and huge reductions in the length of the snake.

Zuma’s Revenge is addictive and it’s fun, but it is more frustrating and rage-inducing than other PopCap efforts of late. Plants vs Zombies never once made you feel like you were never going to finish a level, but Zuma’s Revenge has a lives and a checkpoint system, making you replay a few difficult levels after a couple of failures. It also takes an age to load the game on lesser systems. Yet overall, it’s a great little game though and certainly a worthy successor to the original Zuma.