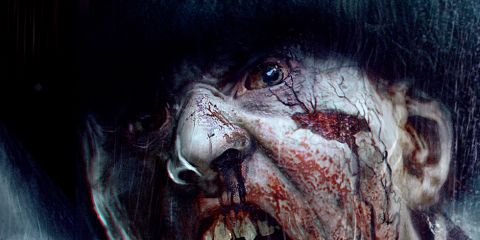 The survival horror genre has seen better days. Resident Evil has all but abandoned the genre, Silent Hill's quality has been in steady decline, and the last few “scary" games have come from small, indie studios as opposed to big, AAA blockbusters. ZombiU ignores what the genre has become, and focuses instead on how it began, honing in on the “survival” part of the “survival horror” genre better than any release in recent memory.

You play as a generic survivor, brought into zombie-infested London by the mysterious (and surprisingly complex) “Prepper.” Contacting you through radio, the Prepper attempts to guide you through the new world, giving you tips and helping you plot from point A to point Z. Plot is extremely light, and yet somehow ends up overly complicated by the end, with very few characters or moments of interest. Even your character is left as a mostly blank slate, with only light identity gifted to their digital souls in the form of a name, a former career, and the frightened grunts they utter when fending off ravenous undead.

While you might think this is a negative, it’s actually important to ZombiU’s fabric and helps make it unique in the genre. A bitten, blown up, or eaten survivor doesn’t respawn, and there’s no way to revert to an earlier save--once you’re dead you’re dead, losing any skills or items you’ve gained as that particular survivor. You’re forced into the body of a new survivor, tasked with picking up where the other left off and killing your former self to loot supplies. It’s an interesting twist, ramping the tension up significantly because death is an actual risk. Usually it works well, but it can be problematic to the story (when characters randomly act as though you haven’t been swapped out for a new survivor) or when it actually sets back your progress, which is bound to happen a few times during the ten-hour trek through the story.

Those ten hours aren’t spent running and gunning, either--survival really is paramount, and a majority of your time in ZombiU will be in foraging for supplies or desperately beating back the undead horde. Weapons are inaccurate, supplies are limited, and ammo is painfully scarce. More often you’ll need to bash in enemies’ heads with your readily-accessible cricket bat. While it’s definitely fulfilling at first, bashing undead brains gets extremely monotonous, as it can take six or seven swings until the undead stays dead. For some reason it’s the only weapon in the game that isn’t upgradeable, though, meaning you’ll spend most of ZombiU staring at the same blood-covered bat as you scrape through every lootable object for items.

The problem with this emphasis on rummaging through rooms is that the found supplies are almost too scarce, and you’ll end up spending most of your time tossing through mostly empty rooms with little to show for it. It’s desperate, dire, and hopeless--likely intentionally so--but that doesn’t make it fulfilling. What’s more, ZombiU seems to place a huge amount of value on weapon upgrades that never feel like they make much of a difference, likely because of the limited ammo keeping you from ever truly seeing how much more powerful your souped-up shotgun is.

But while the limited supplies makes the game less fun, it definitely makes for a more tactical experience. The same can be said about the ways in which Ubisoft opted to use the GamePad. Anything that can be tied to the controller's screen is, from scanning the environment to sniping enemies. Even looting and inventory management, which leaves your survivor vulnerable, is accomplished with taps and swipes on the GamePad's screen, forcing you to temporarily take your eyes off the action. It's cumbersome and sometimes difficult to get used to, but it feels like it’s supposed to be, ramping up the anxiety every time you need to take your eyes off the screen. Ubisoft used the GamePad's weaknesses to its advantage, creating incredibly tense moments. Sadly, some of the tenser segments are unintentionally caused by long load times, including doors that simply won’t open until the next area is loaded, even when you’re attempting to escape a horde of undead.

The multiplayer mode also takes advantage of the GamePad to create an interesting asymmetrical competitive game, mixing Capture the Flag with a typical wave-based survival mode. One player spawns zombies while another fights them, providing a unique game experience. It’s fun in short bursts, but the lack of online multiplayer limits its long term appeal.. There are other features that take advantage of the online connection, like being able to kill infected friends or follow stats of your old infected characters, but we weren’t able to test these features out.

ZombiU’s complete and utter dedication to creating a tense, realistic zombie survival game can be problematic, and its often at odds with itself. Despite this, the game successfully proves that horror games can be enhanced by the Wii U’s GamePad, and does a great job at showing how the new controller can create an incredibly immersive experience.