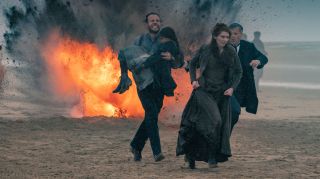 BBC One's recent three-part adaptation of HG Wells's The War of the Worlds returns the alien invasion classic to its natural setting: Woking and the surrounding area, in the early 20th century.

Written by Peter Harness (Jonathan Strange & Mr Norrell, Doctor Who), it stars Rafe Spall and Eleanor Tomlinson as George and partner Amy, who – due to George leaving his wife – must contend with the disapproval of society as well as those pesky Martian tripods. Robert Carlyle provides support as scientist Ogilvy.

The War of the Worlds is available to buy on DVD and as a download now. Thanks to ITV Studios Global Entertainment we have five copies of the DVD to give away. To put your name in the hat for the chance to win one, simply answer the question below.