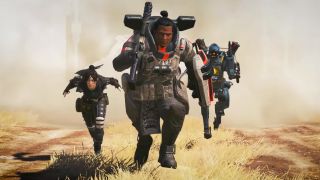 As Pathfinder's corpse crumples across the train carriage following another unsuccessful landing in World's Edge, I can't help but wonder whether I should have taken my peers' advice, and gone to university. Not a real university, of course. No proper degree could sort out this Apex Legends player's abysmal win ratio. On the contrary, another academic institution beckons, and it represents a decidedly different breed of higher education.

Apex University describes itself as an "educational environment where people of all skill levels are able to learn, improve and discuss anything Apex Legends related". Enrollment is as simple as posting your gameplay footage on its Reddit homepage and receiving personalised feedback from one of its many "Coaches", who also host regular streams on Twitch to provide real-time tutelage to thousands of viewers at once, offering reactive top tips that can give Legends an edge over the competition. Its Head Coach, Nihil, likens the University to a forum where players, new and old, can learn from one another.

"It's essentially a cycle of breaking down the habits and skills that pro players have learned through trial and error over thousands of hours of experience,'' they explain, "and then teaching those skills to newcomers in a more effective, methodical manner. This way, the speed at which new players learn is constantly evolving and the bar for 'high tier' play is raised as the esports scene evolves and coaching becomes a more common phenomenon."

The fruits of Apex University aren't just favourable to FPS neophytes stuck in Bronze tier, then, but to the entire Apex community, and part of the reason why its coaches, moderators, and founders are so eager to volunteer their time to anyone who arrives at its digital doors with questions, gameplay footage, or a general desire to learn. Describing how they got involved, Tom, the university's Assistant Coach, explains exactly why this mentor/mentee relationship can be mutually beneficial.

"I started off at the University giving advice in the coaching channel in my spare time," they tell me, "going over people's self-recorded videos of their games and trying to teach others in order to help myself learn; a proven strategy that I use with study and thought I could apply here. I just gave simple advice based off of what the videos I'd seen had taught me, in the hope that I could get help people with the basics of their games and improve through seeing what they did well and what they could have done differently."

Learning through teaching has a proven track record as one of the most effective methods of education, after all, so it's no surprise that coaches like Tom are finding their role helpful for sharpening their own game in Apex Legends, in addition to those that they advise.

So, how exactly does one improve their form in Apex Legends? Like most online shooters, Respawn's free-to-play hit isn't just about aiming in the right direction at the right time, but operates on a constantly evolving meta based around its core roster of heroes, weapon arsenal, and map layout, which itself is constantly modified by each new balance update and content drop. Distinct, another Apex University coach fairly new to the scene, describes the challenge of teaching in Apex's ever changing environment, and how a single video commentary can completely shake up a player's approach to the game.

"Footage feedback usually consists of a single game up until the point where the student wins or dies. We look at their landing location, the weapons and attachments they use, the legends they pick, rotations, movement, in-game positioning, awareness, and so on. Usually, if they want something specific to be looked at, I mainly focus on that, but if something else urges me even the slightest, I straight up tell them what they need to work on."

"I've yet to have a single student that doesn't improve in a week's time," Distinct continues. "I've helped players increase their average kill count per match from zero to six or seven. It may seem unbelievable, as I thought the same, but a little push in the right direction can really go a long way. Teaching anyone, regardless if they're 20 years older or 10 years younger than me, requires them to be willing to learn and listen, which is something I always explain before every session. And in doing so, when they're able to notice their own little kinks that they need to work out themselves, it feels great."

Since Apex University was founded last year, its scope and scale has grown exponentially, with Nihil admitting that supplying the demand for coaching has been the biggest challenge in running the online community so far. Previous students have now become full-time coaches, as the appetite for expert tutorship continues to surge as more and more players invest themselves in Apex Legends' competitive Ranked Leagues. Even so, despite its proliferating reputation amongst the Apex faithful, Respawn itself is yet to acknowledge the University either publicly or in private communications, something which Distinct considers symptomatic of the studio's outreach effort as a whole.

"A little support would be nice but, as with the entire game, Respawn isn't transparent enough in communicating updates, bug fixes, changes, and so on to its community. Leaving players to guess if there was a silent buff or nerf to a weapon or legend [in the latest update] is beyond frustrating [and] it just makes people angry." Nihil, however, remains more hopeful, acknowledging that the studio "has shown a conscious effort in recent weeks reaching out to the competitive community for feedback."

"We're delighted to see what happens next. Perhaps they'll notice us too, although that would be far beyond what we'd ever expected. We're just happy to see people find a place to learn and share their passion for the game. Although it would be wonderful to peak their interest, in the end we're just a community built for the average player to learn and find like minded individuals."

The future of Apex University, of course, is dependent on the future of Apex Legends itself. Should Respawn release a Nintendo Switch port, for example, then the coaching team will suddenly find that it has an entirely different system to train people on, alongside a whole new audience of players. Alternatively, should Apex eventually begin to fall by the wayside, the University will be left with a core community of diehard players, whose average skill level will be much higher than the average student at present. Whatever happens to Apex, though, it's looking unlikely that university faculty will be quitting their roles anytime soon.

"I keep coming back to Apex, not just because I enjoy the game [but] at the heart of my coaching, I just want to improve with others," says Tom. "I'm still your average gamer. I've moved ahead a little bit from where I started, which was at the very bottom of the game, and now I'm able to start competing in matches with some players that I'd never have thought I'd even meet, The fact that the game only gets more challenging from here is what's keeping me interested."