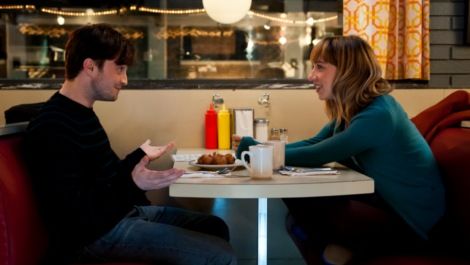 Twenty-five years on from When Harry Met Sally , that old chestnut – can men and women be pals without sex getting in the way? – gets another roasting in a Toronto-set romcom that practically screams “Like me!” at the top of its lungs. That we do owes less to whatever freshness Michael Dowse ( Goon ) brings to this well-worn scenario than to the likeability of its leads: Ruby Sparks ’ Zoe Kazan as adorability personified and some young whippersnapper called Daniel Radcliffe, a promising talent Screen expects to hear more from.

DanRad’s been making all kinds of films of late ( The Woman In Black , Kill Your Darlings , the upcoming Frankenstein ) that appear expressly calibrated to distance him from Harry Potter . What If represents perhaps the most audacious step away to date, in that Daniel effectively plays himself: a diffident, twentysomething chatterbox with an abundance of charm that serves to offset a nagging sense of insecurity. Small wonder the role of Wallace – a medical school drop-out who you will always find in the kitchen at parties – fits him so snugly. (He even gets thumped in the face in one scene, something that should placate any Potter -phobes hitherto immune to his persona.)

That is scarcely the least of the indignities heaped on his character, who at another point finds himself buck naked after some nocturnal skinny-dipping with only some foliage to protect his modesty. Mercifully, What If spreads its humiliations around – having Kazan’s Chantry get trapped inside a changing cubicle, and having Wallace accidentally push her boyfriend (Rafe Spall, using his physical heft to good effect) through a first-floor window.

Yes, there are some cloying moments: the cutesy animations used to bridge scenes, for example, or the fridge word magnets that bring Dan and Zoe together. Then again, What If isn’t all that dissimilar from that corny conversation starter. It’s clichéd, sure. But it also springs a few surprises.