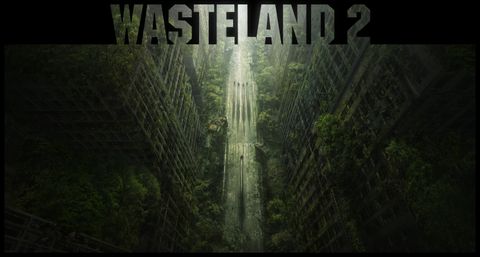 Proof that big thinking PC-based RPGs can totally work on pads, and how not to implement the weighty interfaces that come alongside them - but trudge through this and there's much to love.

Way back when, in the decidedly bleak age when trendy kids were doing The Locomotion while Police Academy 3 - Assignment: Miami Beach played in the background (we’re talking about the bowels of 1988), a subset of PC owners were sampling videogaming’s first proper post-apocalypse. Think of how many of those we’ve fought, shot, snuck and crafted our way through since. From your Rages to your Metro 2033s, all the way up to, and perhaps most potently, the Fallouts, the first Wasteland can be said to have influenced them all. Wasteland 2 is the Kickstarted return to the epicenter of the end times' proliferation through game-dom.

Thanks to the myriad inspirations that that first game spawned, the setup feels a touch familiar. You take on the role of a freshly recruited squad of Desert Rangers, four of them to start with. The immediate locale of Arizona requires a crew such as yours to head out into the titular irradiated landscape to, initially at least, investigate the murder of a veteran Ranger sent out prior to your recruitment. What follows is a spiralling series of minor story lines, weaving and winding around one another as you steadily get to the bottom of that first mystery and the further implications that those discoveries entail.

What you actually do, however, is chat up locals on your travels, pondering your way through conversation trees brimming with juicily written dialogue, occasionally stopping to tinker with your squad, scrap through a combat section, or attempt to solve rudimentary puzzles. The first of these three additional ingredients is by far the most delectable. From the outset you’re able to imprint your crew with personality, via an initially off-puttingly in-depth array of stats and traits.

You can build a sniper who’s great with animals or an engineer who’s as adept with a wrench in a fight as he is when fixing... uh... toasters. We especially appreciated the talents of our team surgeon who was amply skilled when putting our haemorrhaging pals back together post-brawl and had enough points in the Bad-Ass tree to ensure he always had some suitably brash response baked and ready when our team was faced with one of the world’s many troublemakers.

Gear plays a huge part in all of this, too, especially once you’re out in the world, evolving through neatly delivered degrees of necessity. First you’ll learn to survive the turn- and grid-based combat, with weapons that jam when you least expect it and a ragtag sense of always being a knife edge away from failure (and permadeath makes that prospect a potent one). After that you find yourself keeping tabs on an ever-growing inventory of pistols, sniper rifles, assault rifles, melee weapons and more, steadily increasing your team’s individual proficiencies with each and ensuring they're in the best possible shape before each new encounter. Get all that nailed down and you enter the realm of weapon crafting, breaking down existing loot in order to modify the stuff you’re currently using. There’s loads to get to grips with and steadily peeling back the layers is an RPG purist’s pleasure.

There’s a real sense of survival against the odds, too. Your crew develop injuries over time and the resources to heal them are scarce. There’s a mildly effective water mechanic, forcing you to keep hydrated in order to push deeper into unknown territory, but really the magic lies in the palpable sense that your ability to overcome what’s thrown at you hides in smart tinkering. Heady stuff.

Unfortunately there’s a mutated fly beast lying legs akimbo in the Wasteland 2 soup dish. The interface is about as smoothly implemented as a pineapple suppository. Its tiny fonts, muddy icons and awkward prompts make navigating the menus a huge chore. If you're going to bury a metric ton of complexity in menus intended for pad-based navigation you need some uniformity. Diablo III has it nailed, with radial menus which are mirrored across different areas of the UI. Whether picking through skills, weapons or your followers’ abilities, each page required you to flick around a quickly familiar circle of options. In Wasteland 2 trying to find your way around each tab on your menu is like sticking your head into an assortment of beehives.

One particular bugbear was that during combat the font which revealed your percentage chance for a strike to hit, rather than miss wildly, is both tiny and coloured a brand of rusty red, making it near illegible at times. Throw in a camera prone to leaving these essential nuggets of info out of frame and you can perhaps understand why our dentistry bill was so high this month (it was the frustrated grinding what did it).

Time can make these elements bearable. The same can’t be said of the game’s general visual quality. It looks oppressively bad, but not like it was designed to be. Character models share the same poo-smear brown palette as almost everything in the environments you comb. For all of the personality you attach to these malleable minions none of that feels fleshed out visually in how they are represented on screen.

Those aforementioned environments do vary, but none can be said to be impressive, or to entice in their design. It’s a tough ask, to make a landscape as alluring as it is grim, but hey, that’s what needs to happen if we’re to plug our eyes into it for the full 60+ hours required to polish the game off. It’s a factor which will see many people bounce straight off of Wasteland 2, which is a huge shame. Even as its progenitor did way back when, there’s a unique blend of survival combat here which others could and should learn from.

Proof that big thinking PC-based RPGs can totally work on pads, and how not to implement the weighty interfaces that come alongside them - but trudge through this and there's much to love.