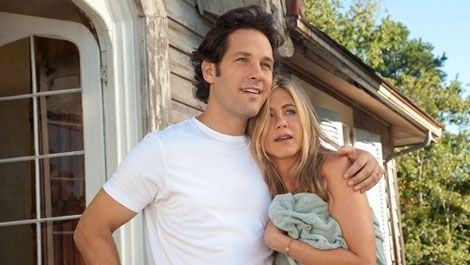 The last time Paul Rudd and Jennifer Aniston shared the big screen she was pregnant and he was gay.

Fourteen years on from The Object Of My Affection the chemistry between the former Friends is still apparent, even in such a lightweight vehicle as this fish-out-of-water comedy from Role Models ’ David Wain.

Rudd and Aniston play George and Linda, married Manhattanites compelled to surrender their minuscule “micro-loft” after he gets sacked and HBO reject her documentary pitch about penguins with cancer.

While driving to Atlanta to move in with his dick of a brother (Ken Marino), the pair stumble upon a hippy commune and are persuaded to stay a while by its charismatic leader Seth (Justin Theroux).

Before the moon is in the seventh house the couple have cast off their inhibitions and are experimenting with nudism, tree hugging and free love. But it’s not long before Seth and Linda get a little too friendly for George’s liking, a situation complicated by a plot to raze the kibbutz to the ground and erect a casino in its place.

There’s plenty of fun to be had here at the expense of the collective’s screwy members, a dotty ragbag that includes aged acid casualty Alan Alda, naked wine-lover Joe Lo Truglio and Malin Akerman’s Eva, an accommodating cutie who exhorts George to “think about being inside me”.

Wain also takes advantage of Rudd’s sizeable repertoire of discomfited reactions and petulant outbursts, both of which come into play once he realises Seth’s no-barriers ethos means he can’t even get some me-time when he’s taking a dump.

Wanderlust is on shakier ground once it stops taking shots at communal living and starts suggesting that ‘Elysium’ could be a viable life choice Linda is prepared to end her marriage for.

But after the flak they took in Martha Marcy May Marlene , it’s nice to see at least one film give cults the benefit of the doubt.