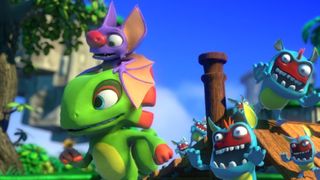 Yooka-Laylee from Playtonic owes a lot to classic 3D platformers. The Banjo-Kazooie series' influence is most palpable - which makes sense, seeing as so many of the team had a direct hand in creating those games - but there's also a sense of newness and revitalization that Playtonic hopes Yooka-Laylee will bring to the genre as well.

One of the biggest tweaks Playtonic is bringing is the idea of "expanded worlds." Yooka-Laylee takes place in both a large open-world hub and smaller, more thoughtfully constructed areas that exist inside the pages of various storybooks.
It's not too different from the way Super Mario 64 functions with Peach's castle and the multitude of paintings therein, letting players choose which worlds they want to visit in whatever order they choose. Yooka-Laylee's levels are a fair share larger, but conceptually, it's the same idea.

Where Yooka-Laylee breaks from that mold is in how you can revisit and build upon your experiences with each level. Going back to the Super Mario 64 comparison, I might really like Bob-omb Battlefield, but that level will always be the same. Sure, a character might spawn in a different location or I might open up some cannons, but it's still the same geometry. In Yooka-Laylee though, I can revisit a favorite world and make it physically bigger, adding new challenges, new areas, and new NPCs.

During a hands-off demo at E3, Playtonic showed a relatively simple world with your expected quests: collect this, find that, race them. Movement was smooth and the world was lovely to look at, with several secret paths and side-objectives to fulfill.

Once the level was expanded however, suddenly there were new regions to explore and NPCs to talk to. A mountain with a stat-boosting item at the top could be scaled, or a quest centered around helping a sentient cloud bring rain to the valley below (he'd been having performance anxiety ever since his wife left him for a typhoon, you see) could be completed.

An expanded level's new features aren't simple one-and-done challenges though - they too can impact the environment. By shooting at the aforementioned cloud with water berries, a previously dry riverbed would flow with water, granting access to new areas. By shooting him with ice berries, that river would turn to ice, in turn opening up a more challenging race.

Yooka-Laylee's story can be completed simply by finishing the basic versions of each level. But if you've got a favorite, or want to take this collecting business seriously and complete the game 100 percent, you'll want to expand them. In this way, you can set your own pace and take on more difficult challenges when you're ready. As the headline above says, it's not a linear progression of easy to hard, it's an outward spiral of difficulty: you play a level, feed into it by expanding it, beat that, rinse and repeat.

Playtonic says it's aiming to appeal to three main groups of players: those who are fans of the more linear, constructed levels of Banjo-Kazooie, those who prefer the more open world of Banjo-Tooie, and those who aren't really nostalgic for either, but rather want something new in the realm of 3D platformers.

That's a lot of people to please, but this clever expansion mechanic could make a world's load of difference.