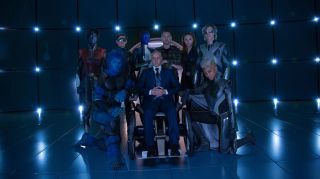 Bryan Singer cut two slightly different versions of X-Men: Days of Future Past back in 2014; there was the film we all saw in cinemas and then there was the Rogue Cut which added in Anna Paquin's mutant and premiered on DVD and Blu-Ray. In X-Men: Apocalypse it's Lana Condor's Jubilee who's left on the cutting room floor, but Singer says we shouldn't expect an alternate cut of his latest X-Men film any time soon.

"There will be nothing like the Rogue Cut or anything like that", Singer told Fandango. "I'm not a big fan of director's cuts or extended editions, I never have been. In the case of Apocalypse, I removed what would be considered a conventional amount from the movie to protect what we call the collective experience of the feature theatrically. How it feels pace wise and movement wise".

While there's no Jubilee cut on the way, we can expect a ton of deleted scenes when X-Men: Apocalypse comes to DVD and Blu-Ray; "We do have a moment where Jubilee uses her powers that you'll see on the DVD. I wanted more Jubilee".

"There was also a significant moment that sadly I had to cut", Singer continued. "When they’re moving through the mall and Nightcrawler remarks about the other people that “they don’t fear us.” And he thinks the mall is this paradise, and that was my homage to Moscow on the Hudson, when Robin Williams came over to America during the height of the Cold War and saw a Bloomingdales and thought it was a temple. But no, it was just an ‘80s mall!"

Both of the scenes Singer describes sound like fun - and some of it can be seen in this TV spot - but they also sound like they would be unnecessary additions to the movie, which is probably why they were cut. It will be interesting to see what other deleted scenes make it to the Blu-Ray when it's eventually released.