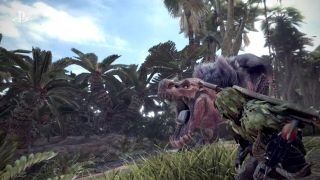 As a longtime, unapologetic fan of the Monster Hunter franchise, I felt my pulse quicken during the PS4 show at E3 2017 when I laid eyes on a character wielding a very Monster-Hunter-looking sword, battling very Monster-Hunter-looking beasts. When Monster Hunter World was properly announced, and upon learning that it would be available not just for PS4 but Xbox One and PC as well, anticipation turned to ecstasy. A current generation Monster Hunter game on a full-blooded home console (and not a slightly behind the curve Nintendo platform) has been a dream of hunter fans for years, one piqued but never wholly satisfied by similar takes like Toukiden and God Eater.

After the original and its sequel launched on PlayStation 2 back in 2004, Monster Hunter languished on the PlayStation Portable, 3DS, and Wii/Wii U for more than a decade. While many of these iterations were excellent games (I have a particular fondness for Monster Hunter Tri in all its incarnations), they always felt like they were straining at the leash. You could see the seams and limitations of the hardware, and the gaps set the imagination on fire, thinking of what would be possible with this potent formula on a modern console.

Sony's E3 2017 press conference was a classy, confident show... just not an exciting one

Topping the wish list for a lot of fans is a massive, seamless open-world (which Capcom has indicated World will offer). The Monster Hunter franchise has always excelled at giving players varied environments to traverse, from rocky peaks broken by flowing lava to icy plains and frozen caves, to the bold underwater seascapes and sandy beds of Tri. But these areas have always suffered from being splintered into small, discrete zones, some barely larger than a few paces across. Between each zone you’d have to suffer through a loading screen and break your momentum, a real nuisance particularly when you were in pursuit of wounded quarry. Given how often monsters you were battling would take flight (sometimes literally taking to the air to take direct routes you as the player didn’t have access to), one fight might end up encompassing ten or more loading screens.

In Monster Hunter World, the hope is that we’ll be set loose in massive environments with distinct areas we can access without having to trace the lines connecting different zones and then twiddle our thumbs as they slowly load. I’m all for preserving the unique character of different hunting grounds, but hopefully we’ll access them as fully unified, large areas, replete with the rich diversity of flora and fauna we’ve become so fond of harvesting for armor, weapons, and upgrades.

Speaking of all the plants and insects Monster Hunters are used to tracking down for crafting, the power of this current generation of consoles means not only a greater number of them, but also that they’re more realistically and attractively rendered. This goes for the huge monsters on our prey list as well as the lush environments we’re accustomed to, and if the reveal trailer is any indication, World looks primed to take advantage of the additional processing power to give us the beautiful renderings we’ve been craving. Finally we’ll get a look at a Monster Hunter game that isn’t tamped down and vaguely cartoonish looking, and not plagued by jagged edges and low-res models.

The other, blue-sky dream of a Monster Hunter on console is the possibility of a real story, something with depth and the proper presentation this generation of hardware is capable of. While the real work here will be done on the design and writing end (and Generations took some steps towards a hunting game nestled in the framework of an interesting story), supporting good writing and characters with beautiful cinematics adds the potential for epic scope and sweeping grandeur. Monster Hunter stories, such as they are, have always focused on a lone, new hunter, and there’s the seed of a powerful story in a fish-out-of-water tale of a young hunter in a strange land, hungry to make their name and save the world from ravening monstrosities.

And of course, a MonHun game on PS4 means a new beginning for the franchise, which opens up the possibility of brand new and innovative ideas the series has never seen before. We’ve already seen a glimpse of some of these ideas, in the form of the ghillie-suit-esque camouflage and grapple hook/zip line from the trailer. Hopefully Capcom takes this opportunity and runs with it, with some bold new innovations for a series that was starting to go a bit stale. One way or another, our curiosity will finally be slaked in early 2018.