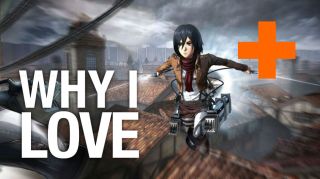 Attack on Titan PS4 knows something you might not: Spider-Man 2 for PlayStation 2 sucks now. It was amazing back in 2004, no doubt, but today? Its primary pleasures have aged from wine into nasty, jagged polygon vinegar. What Attack on Titan understands is that web-slinging or grapple hooking or whatever kind of zany swinging your action game has, it has to feel tied to a real sense of gravity. It has to let you move in impossible ways that nonetheless feel possible. That’s why I love the Omni-Directional Mobility Gear, Attack on Titan’s swinging rig of choice. It’s just real enough to make swooping around the game’s freaky giants, forests, and cities delightful.

If you’re unfamiliar with Attack on Titan, here’s the score: the world is overrun with Titans, leering, dull-eyed behemoths that sort of look like a cross between a bloated oversized human being and a sweating, nude Ken doll. They are profoundly difficult to kill, they seemingly don’t die of natural causes or need sustenance to survive, and all they care about is devouring actual human beings. Not to survive mind you; just to chew them up and spit them back out. These lumbering nightmares have reduced the world’s human population down to a single city state whose massive walls have kept the titans out for 100 years. The game picks up a few years after a skyscraper-sized titan, the largest ever seen, destroys the outermost wall and forces humanity to reinforce its strange military to fight back. The only way to kill a Titan, though, is to slice open a small chunk of flesh at the nape of their neck. So the soldiers’ primary weapons are razor-edged swords and the Omni-Directional Mobility Gear, a gas-powered engine that fires twin grappling hooks out and lets them swing off of trees, parapets, and the Titans themselves.

Given that the PS4 game was made by Omega Force, the studio who has made nothing but Dynasty Warriors and Dynasty Warriors spin-offs for the past fifteen years straight, you’d be forgiven for expecting its take on Attack on Titan’s wild mobility would be simplistic at best or janky and broken at worst. Instead, the house of Musou has turned in a game that’s deliciously playable, fully capturing the tension, thrill, and even a sense of skill inherent in the universe’s fantasy weaponry. The very first thing you learn in the game is how to swing about the environment, which is done simply by tapping just one button, but gains complexity once you start having to actually fight and avoid Titans in combat. Switching altitude and direction feels as natural as just walking in another game, but when it comes time to fight, you can grapple onto five distinct points on a Titan and circle around them provided your ODM gear still has fuel and nothing gets in the way of your grapples.

In action, swinging around on the ODM is intoxicating. Zipping across a city under siege to try and save one of your compatriots before zooming back in the other direction where an enormous Titan is trying to gobble up civilians is both viciously tense and freeing. The classic Spider-man 2 game made Spidey’s web-slinging feel tactile, like he was really connecting with the buildings. Playing it today, Spidey feels imprecise and, worse still, there’s nothing to do with his abilities. Attack on Titan’s ODM gear ties you to the game’s world and challenges in a way that is truly, to use a sorely abused term, visceral; you feel it in your gut the first time you swoop down on one of those hulking freaks and it’s unlike anything else in games.