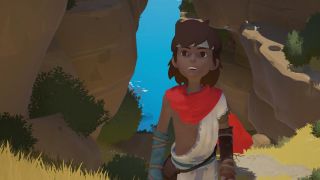 I found myself crying in the middle of a crowded cafe the other day. I’d been trying to explain Rime to my girlfriend, and in summoning its final scenes I inadvertently hit a wellspring of lachrymosity. The look of polite bemusement she gave me matched my own utter surprise: I was physically weeping over a puzzle game, for goodness’ sake. In the two years prior, she’d seen me cry exactly twice: once for good reason, and a second time towards the end of Titanic when the strings and images of people trapped in steerage got a bit too much. And now, suddenly, this. Rime is a powerful game.

It’s also a very unusual, slow-burning, and I think, a misunderstood game. For the first two hours, a considerable passage of play, it runs the risk of losing the player completely by offering only occasional prosaic puzzles to complement its painterly Mediterranean looks. Without those clear blue skies, impossibly tall whitewashed towers, Salvador Dali landscapes and the growing sense of enigma all those elements create as you skip and leap around in them, there wouldn’t be much to entice you further forwards. Certainly in my case, early on I was basically playing because it looked nice, and because the puzzles seem to be gradually building in complexity.

But something else is happening during that phase, too. Developer Tequila Works is deftly letting you know that all the symbolism in Rime’s visual language isn’t just art for art’s sake. The dark figure. The fox. Those looming towers. The cape... It’s all going somewhere. This is where Rime sets itself apart from the predominant school of thought in modern game storytelling, by simply trusting that you’ll notice and care about those motifs rather than making them explode or kiss each other in front of a forced camera.

It’s a brave approach, because in Rime the story is the game. Hunting for lore tidbits in Dark Souls is an enjoyable diversion, but it’s far from the focus - there’s always another oversized medieval knight to swear at just around the corner. Conversely, Rime exists to tell its story first and foremost. Its puzzles, really, exist to propel you along that story.

Environmental storytelling is quite literally as old as the hills, of course, and I’m not suggesting Rime’s the first video game to implement it. Dishonored 2 and What Became of Edith Finch are both fine recent examples of environmental storytelling. Closer to home there’s Portal, a similarly wonderful puzzle/adventure game which says a lot about Rime by comparison. Valve uses narrative in Portal as connective tissue between puzzles which, once again, are the main attraction. They do so in a way that completely shatters expectations and transcends the trad puzzle game experience completely - but there’s never any confusion as to why the game exists. It’s so you can shoot portals into walls, and at floors, and do impossible jumps. Rime is the polar opposite: the puzzles exist only to entice the player further, and to tell the story.

But that still doesn’t blow the dust away completely and expose Rime’s singular quality. To do that, I must call upon M. Night Shyamalan. Please welcome him to the stage.

Shyamalan’s 2002 thriller Signs weaves a series of unusual character traits and unlikely happenstances into its main arc about a rural family under siege from an unknown invader, and as the movie progresses you’re given to understand that they’ll all become vitally important in the final act’s grand reveal. 15 years on, and knowing Signs - knowing Shyamalan - cinephiles are now once bitten, twice shy about that technique and the likelihood that the grand reveal will be disappointingly on-the-nose, the unusual traits and unlikely happenstances too contrived.

Rime is not Signs, but there are parallels. It doesn’t exist simply to shock you with a twist ending, but it does sew a lot of seeds early that don’t come to fruition until the game’s almost over. And it certainly doesn’t fall flat when it reveals itself, but by placing such enormous emphasis on its conclusion it runs the same risk Signs did. Thanks, M. Knight - you’re dismissed.

With that first couple of subdued hours behind it, Rime finds a more confident pacing. Puzzles do grow in complexity, but they peak relatively early and never really reach that note-scribbling, alt-tabbing convolution of, say, Fez, or The Witness. The latter is an important distinction, actually: both games want to tell their story using their surroundings, but Jonathan Blow is very clear that the puzzles themselves are centre stage.

What Rime does instead is fold its symbolic elements increasingly into its puzzles, demanding strange, abstract rituals to be performed with light and darkness, and delighting in creating huge diversions. If there was any danger of leaving you unsatisfied with a lower difficulty level, it’s sidestepped in those moments you realise the door you’re now walking through is the one you couldn’t get past an hour ago.

The effect that has, I think, particularly for the brazenly stupid such as myself, is that it allows more brainpower for considering the surroundings. The synapses that would ordinarily in the genre be preoccupied with setting clock faces in a particular order to move water through some pipes, or some such Machiavellian nightmare, are freed up in Rime to keep asking the big questions: what is this island, and why am I on it? Who is the cloaked figure? Can I trust the fox? Are those moaning orbs on spindly legs sentient? The answers aren’t forthcoming, of course, but you’re given plenty of time and space to ponder them.

In that way, it’s more like a walking sim played at running speed. Walking sims are, after all, games about the absence of something, and the search for meaning in that absence. Their imposed meditative pacing allows for a keener eye on the surrounding world and forces the narrative into sharper focus. It’s just that walking sims usually don’t give you much to do while the dour voiceover plays.

What if Rime isn’t an adventure game, then, or even a puzzle game, but an extension of the walking sim which solves the genre’s problem of passivity? There’s no voiceover here, but that only serves as a strength: now the environment does all the talking.

I’ve spent this whole time trying not to spoil the ending for you, and I’ll mention it only in the broadest terms now: only after finishing Rime does it become clear that Tequila Works was absolutely counting on you to see the game through to completion. What an unusual and brave stance for a game developer. And what a shame it would be if the game wasn’t rewarded for it.

Rime makes our list of the best games of the year so far - but what else is on it?

Rime finds a way to tell you a story in a way that few have attempted and almost none have successfully realised, and it might make you sob in public places afterwards. Goodness, I’m welling up even now - play me out, Mr Shyamalan:

“So 'The Last Airbender' 's philosophy and culture feels like a beautiful idea to me: That we inherently have connections to the elements and what they teach us, and to each other.”