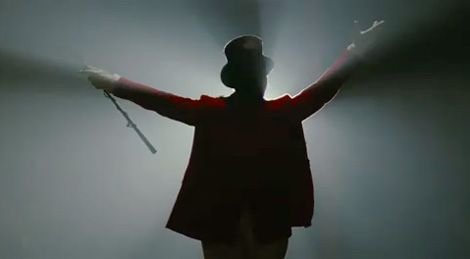 Roll up, roll up ! Ladeez and gentlemen, prepare to experience Robert Pattinson’s death-defying attempt at a fang-free romantic lead, without a net.

The trillion-strong Twihard hordes ensure that R-Pattz can open a movie – but can he shine playing a live human, or only sparkle as Twilight’s undead Ed?

The question’s even more pressing after the halfbaked James Dean act he pulled in last year’s Remember Me. Drum roll, deathly hush… and glory be, he’s very watchable indeed in this lush, Depression-era melodrama, based on Sara Gruen’s US bestseller.

Pattinson plays orphaned veterinary student Jacob Jankowski, who steals a ride on the Benzini Bros circus train in 1931. First he tumbles into a job as a vet – and then into a forbidden love affair with married Marlena (Reese Witherspoon), the big top’s star attraction.

As do big ones, when he puts Marlena’s terminally lame horse out of its misery, rather than let her domineering ringmaster husband August (Christoph Waltz) work it to death, in a scene typical of the film’s sentimentality.

If you want to put a label on it, WFE is a women’s picture, the way they used to make ’em, when male stars flaunted tears without attracting cries of “Grow a pair!” This sob-stuff is tailor-made Rob-stuff, frankly.

He’s anchoring a movie that’s old-fashioned in the best sense; one that likes its spectacle big and spangly (lions and tigers and coochie girls, oh my!) and its emotional arc bigger, so Jacob’s mixture of restrained doe-eyed suffering, idealism, and hot-headed protectiveness fits it like a tuxedo.

Believability in a period role takes some doing, but Pattinson’s understated aw-shucks courtesy and retro Montgomery Clift vibe pulls it off with élan.

We’re talking two acts’ worth of trembling longing, as Jacob and Marlena eye one another across Rosie, the elephant that August acquires for Jacob to train up as a star act. Such simmering requires major chemistry between the leads.

Thankfully, Reese Witherspoon, whose Jean Harlow-styled Marlena is both caged bird and weary pragmatist, brings a nicely nuanced ambivalence to her role, even if she’s a little hard-boiled for taste.

Drawn to Jacob, but protective of the schizoid husband who rescued her from small-town poverty, her deft mixture of risk-taking and reluctance gives some welcome tension to their growing attraction.

But Pattinson isn’t the only one proving himself in the ring. With WFE, director Lawrence graduates from I Am Legend and Constantine, creating a classy if conventional prestige piece.

Gone is that splintery, MTV-maestro jigsaw style, replaced by a plush old Hollywood panoply of circus life and luscious, money-maker star close-ups. Neither he nor scribe Richard LaGravenese mess with Gruens’ story structure, presumably because it’s burnt into the brains of so many book-clubbers.

To their credit, they plant the love story in a grit-and-glitter look at a Depression circus, showing the grift, violence and near-bankruptcy behind the tinsel and tights.

Christoph Waltz’s August is key to this, an edgy, seductive bundle of the charm and ruthless cruelty needed to keep the show on the road. On the downside, delivering a muted multiplex version of Hans Landa doesn’t exactly stretch him.

Pitching hard to be a romantic epic in the English Patient mould, Water For Elephants has the look and sound down pat (Rodrigo Prieto’s golden-glazed visuals, James Newton Howard’s swelling strings, the sumptuous production design).

But, hamstrung by its glossy romantic simplicity, an all-round shortage of surprises, and a sex-and-violence-suppressing 12A cert, it simply can’t muster the necessary emotional heft and narrative sweep.

Where it does score is by stirring in a huge crowd-pleasing dollop of animal magic. Rosie the elephant is 9,000lbs of lemonade-stealing charisma, whose hidden tricks provide several key plot points and are bound to elicit industrial amounts of “aw”-ing.

When August sets about her with a bull-hook, hearts will break. If Water had been released in time for awards season, Rosie would’ve been the film’s one sizeable shoo-in.