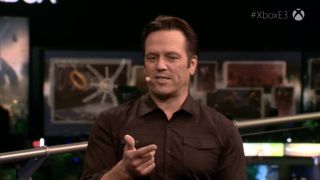 Xbox Play Anywhere sounded like a big change when Microsoft announced it at the Xbox E3 2016 media briefing: giving away free PC versions for first-party Xbox One games (and vice versa) and letting players keep their progress and achievements regardless of platform. But it's become a bit less clear which games this grand new initiative actually applies to.

Xbox boss Phil Spencer said in a post-show interview that Play Anywhere would apply to "first party titles", as in games from Microsoft Studios, but he didn't specifically say it would be for all of them. But then a Microsoft blog post went a bit further - at least, until it was quietly edited a few days ago, as discovered by YouTuber The Red Dragon.

Here's the original wording from the blog post, via the Wayback Machine: "Every new title published from Microsoft Studios will support Xbox Play Anywhere and will be easily accessible in the Windows Store."

And here's the new version, with emphasis added: "Every new title published from Microsoft Studios that we showed onstage at E3 this year will support Xbox Play Anywhere and will be easily accessible in the Windows Store."

Microsoft has several upcoming Play Anywhere games outlined on a promo page, if you can't remember what all showed up on the stage, though the link for a comprehensive list appears to be broken at the moment. But it's still a substantial selection.

I think Microsoft made that little addition to its original messaging just to leave itself a loophole in case any of its first-party games can't be Play Anywhere titles; there could be licensing concerns, for instance, or it may want to put out more mobile-only games like Wordament. Still, it would have been good to note that distinction in a more upfront way than an unmarked blog post edit.