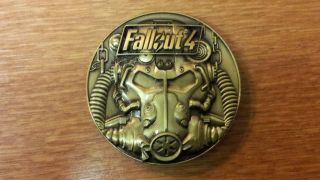 Chances are you’ve never heard of a challenge coin unless you’re in the services or the military. The metal tokens are a simple mark of service or achievement. They commemorate everything from membership in a particular unit to service in a certain conflict. Think of them as Trophies you can earn in real life.

Here’s what they usually look like in their military form:

However, this is what happens when video games get hold of them:

The chunky medallions have an unclear history, with origins that vary from a specially minted bonus payment given to Roman legionaries, or a simple present given by a World War 1 lieutenant to his men, that later helped a downed pilot prove he wasn’t a spy and avoid a firing squad.

Over the years they've been increasingly co-opted to commemorate everything from special anniversaries to products and companies. And that includes video games. They usually come with games bought on military bases or exchanges (generally accessible by active/former service members, or their families). And, like the more serious official versions, these are basically a thank you for putting your life at risk.

Check out this gallery:

Obviously their limited availability and apparent value - soldiers earn them in the service of their country - mean they quickly become collectors items. Ebay is littered with listings, and prices vary wildly. Stuff like Skyrim and Fallout 4 can still hit $50-60 dollars, while Dishonored 2 is currently available for $15 (I suspect the games with a more military feel command higher prices).

However, while collectors might want to round them up, some see the coins in general as overused. While the more ‘serious’ service-focused and commemorative ones used to have a more meaningful value, films, TV shows, manufacturers and, obviously, video games have diluted their appeal for some: “Challenge coins used to be cool, and some smaller military communities still value them. They get passed out like candy, and any person who's been in the military for a little while generally has a box full of them, no wonder most people don't give a crap about them,” says one commenter in response to a post discussing the rewards.

That’s not always the case though. One navy officer with 20 years of service told me, “Just remember that you are reading the vocal minority” as far those opinions go. With the official coins he explains that, “you can buy a lot of those coins at the exchange, or in my case, ship's stores. There are some coins that are only given out and can't be bought. If you ever meet secdef [the secretary of defense] or the CNO [Chief of Naval Operations] or someone like that, they'll typically give out a few coins.”

The video game versions, on the other hand, might not be issued for service, achievements or meetings - you basically buy them - but that actually means  they can be harder to get than the ones you earn. “I've only gotten one challenge coin by buying Destiny at the Navy exchange. They're not given to us and are rarely available,” explains the Navy officer. “The game ones are usually attached to the physical copy of the game for sale. I've seen a handful with major AAA releases, but not very often.”

It’s that scarcity that, to the right people, makes them all the more interesting. “In regards to gaming challenge coins, personally, I'd think they'd be highly collectible,” my Navy source explains. “I'd love to have them for my favorite games. If they're included in a collector's edition (maybe for an extra $5), I'd be all in.” As it is these coins are more randomly acquired: “they're just taped to the game packages on select titles. Wish I could find them more often.”

These video game challenge coins tread a strange middle ground between collectors’ items and rewards for life risking work. Merchandise you can buy, sure, but only if you serve your country in the military or other services. An odd recompense for putting yourself in danger but it means that while people who aren’t in the armed forces or services might be able to drop a few dollars on eBay to buy one, we’ll never really earn them.