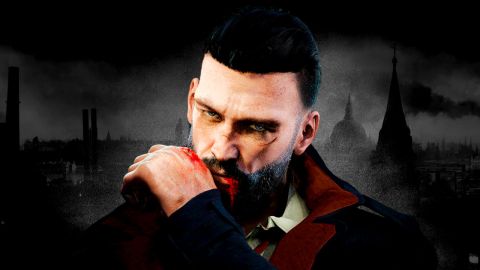 As much a detective story as a horror one, Vampyr rewards you for taking an interest in the people around you and tests your moral compass with a lack of black and white options.

At the beginning of Vampyr a loading screen tells you things will be so much easier if, as newly turned vampire, you eat people. Be the monster you’re expected to be, and everything will just be better. The XP you need to level up sloshes around inside the people you meet in its thousands, in stark contrast to the few hundreds you can pick up from missions, or the basically insulting tens you get for defeating enemies. The whole game is set up to test your resolve - one quick little murder and you’ll have more XP in seconds than you could probably get in an hour of basic play. What kind of person will you be?

It’s an interesting mechanic because being good is harder, and it’s fascinating to have the moral quandary of people-fueled immortality taken out of story beats and put very firmly and practically in your hands. If you’re trying to resist all that murderific vampire power after the opening's blatant reverse psychology then enemies will be more difficult to defeat and useful power ups harder to get. As you progress the temptation to chew is hard to resist as you slog through fights you know could be easier if you just ate a couple of people. Just one person isn’t that bad is it? Someone no one will miss, or someone that’s so bad you’re sort of doing the world a favour?

However, there are consequences. In the game’s 19th century London setting the Spanish Flu runs rife through the streets you visit as Dr Jonathan Reid, a newly turned vampire, and the districts are all teetering on the brink of chaos. If too many people die (by your hand, disease, or events you might trigger), you might lose an area completely - filling it with beastial sub-human skal vampires, and forfeiting all the things it has to offer. Even if you avoid a complete collapse, the effects of your actions can see characters disappear, become monsters or join the ranks of local vampire hunters - at which point all you can do is kill them and say goodbye to any missions/rewards/clues they might have had. To avoid this you can cure the various diseases people pick up with crafted medicines, creating a paradoxical situation as you balance killing and curing in equal measures.

Where things get really interesting is that every single person you meet has a story. They have relationships, things going on with their lives. Some of the arcs might be small but there are no incidental characters that don’t matter and there’s no way of knowing how important someone might be initially. If you do eat someone you’ll do so knowing that they have a family or friends, hopes and dreams, and probably a mission or two for you.

There is fighting and exploration, which I’ll get to later, but Vampyr really is about conversation and investigation. It’s a detective game at heart, all snooping around and asking questions - I found myself constantly drawn to learning as much as I could - finding all the people, tracking down relationships and poking around because I just had a hunch that some bad/good guy wasn’t quite as they seemed. So many times a chat here, an overheard hint there, or a note found in a draw revealed a paragon of virtue’s darker side, or that a villain was actually a victim.

There’s a web to unravel if you start pulling at the threads and some dubious grey morality. Who deserves to die more: a thuggish criminal trapped by poverty trying to support his children with the only option he has, or an outwardly kind doctor who faked his credentials and is grave robbing on the side? These secondary elements are often only uncovered if you dig around, and the conversation threads they unlock can easily be permanently lost with a wrong answer. The writing and acting can be ropey in places but it still has enough character to bring the world and the people alive enough to make you care.

Of course if you don’t want to spend 60-70% of your time chatting the night away there’s always an obvious ‘make the next bit happen’ prompt in conversation. Although the ability to skip text is woefully implemented - instead of being able to skip a line once you’ve read it on screen, you can only cancel the entire answer, forcing you to listen to it all or risk missing something.

When you’re not tracking down clues and information, or curing migraines, you’re exploring a dark, theme park-moody take on 19th century London - all shadowy, rickety streets full of low vampires and thuggish vamp hunting vigilanties. It’s not a huge map but open enough to make exploring initially enjoyable with plenty of atmosphere and detail to its smokey cobbled streets. Although, that said, it desperately needs a fast travel system as late game - when you just want to get stuff done - the winding streets and unavoidable fights with inconsequential filler enemies can be a pain.

Get help with the afterlife with our Vampyr tips.

When you do fight, the combat is functional at best without ever really being outstanding. It’s fun but there’s a slight fuzziness as you dodge, attack, or unleash magical blood-fuelled attacks. When it works it can feel great, as you woosh around low level minions in a rush of black smoke, and fire spears made of blood. But there’s a lack of crispness and precision that can really be felt against tougher enemies like bosses, or groups. It’s possible, for example, to get caught in a corner, betrayed by the camera, or trapped between multiple blows and ranged attacks with no escape beyond ‘mash a bit’ and hope. Overall though it’s fine: solid if uninventive.

One slight frustration is that you can spend so much time talking to people, trying to cure them, and managing a district only to wreck it all with one wrong answer. The game’s divided up into chapters that often end with meeting the ‘pillar’ of a community - a central person that holds an area together. You chat about what’s happened and then you have the option to kill them, spare them and, if you’ve uncovered enough, a different third option. After what can be many hours play, you can near doom an entire district with one wrong answer. And I constantly got these encounters wrong - the third special option that takes work to uncover can actually be bad, for example. In another case I let someone live… and that made things so much worse than killing them. Consequences to actions are good, but hanging so much on a single multiple choice selection after hours of hard work can emasculate any feelings of responsibility for your actions.

As a whole, though, there’s a good, if occasionally clunky, game here, with some really interesting ideas. That central pull of vampiric power at the expense of people’s lives and the evident consequences of all your actions is well realised. While the sense of investment in the world is strong as you run around with pockets full of drugs trying to avert disease based failure. The people you’re trying to save, or deciding to eat, are fleshed out well enough, and with enough complexity, to leave you making decisions based on what you believe, not through totting up some in-game metric. It’s a very narrative focused game with some rough edges, and a slow conversation heavy pace, but the shape overall is an enjoyable take on a gothic vampire fantasy.

As much a detective story as a horror one, Vampyr rewards you for taking an interest in the people around you and tests your moral compass with a lack of black and white options.