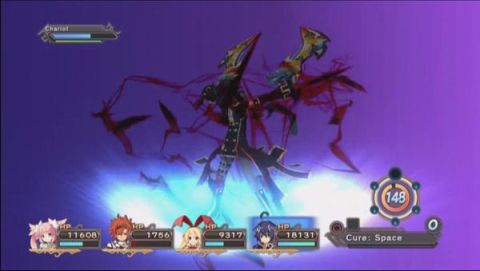 Given that Trinity Universe is the offspring of three acclaimed JRPG developers (and indeed, features characters from Disgaea and Atelier Iris), you’d expect greater things.

Instead, this collaboration has just taken all the tedious elements from an already tired genre, and emphasised them, favouring eccentricities over substance. Expect endless dialogue delivered by static character cutouts. Expect hours of text based tutorials. And expect plenty of random battles against identical enemies that look like they’ve wandered straight from a PS2.

If there’s one small mercy, it’s that the battle system isn’t menu based - instead requiring you to enter combos much like a beat-em-up. Better still, you can combine moves with another party member to unleash ridiculous stat-high attacks. But given the thin storyline (the opening hours involve countless arguments about hair), repetitive dungeons and loot overkill, it ends up feeling dreary. Stick with Persona 4 for your RPG needs.