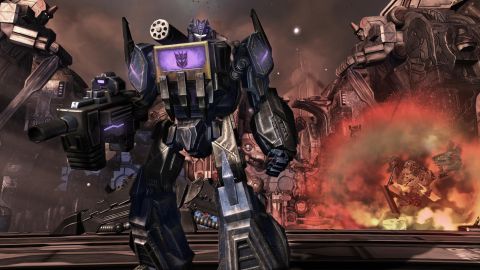 This is the most timid, lily-livered apology of a videogame we’ve played in quite some time. Oh, it’s for kids though, isn’t it? Yeah, that makes its paucity of ideas or guts all okay and everything. Let us tell you: each grey hair and worry line that sprouts onto your visage in the haze of your bathroom mirror should be celebrated with a full-on street party, because it means you’re another feature removed from the target audience of ass-biscuits like this that are packaged up and palmed off as games at 50 bucks a pop.

Let’s survey the wreckage. It’s a game of two halves: a lightgun shooter in the Time Crisis mold, and this really tragic thing that looks like a racing section if you have a sty in each eye and a hallucinogenic pill on your tongue. The question of which one is worse is a mystery that we’ll take to our graves.

The shooting sections are beyond dire. Holding A hides your bot behind a rock, at which point your health meter recharges at a rate of 100% every one second. Therefore the only way you can die in the game is if a loved one manages to tip a vase of soil-water onto the console before the despairing horror of it all does you permanent mental damage. You have a choice of four weapons, each a bit useless in their own way, and enemies will sometimes move around a little, but don’t go expecting it of them. Then it’s out of the frying pan and into the kiln with the driving (or if you’re lucky, flying) bits, which consist of holding down Z to trundle around in first gear while your enemies make a really cursory attempt at chipping away at your immortal health bar with their peashooters.

You can play as either the Autobots or the Decepticons, but the only difference this makes to the game pertains to the depth of the coma you slip into. And that’s about it, really. You’d have more fun if you asked a professional wrestler to try to transform your skeleton into the shape of a moped.