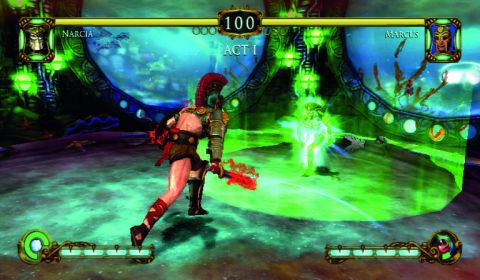 In Tournament of Legends, gamers are given the unique opportunity to fight as the C-list celebrities of forgotten Greek mythology. Characters are obvious stand-ins for classics and the roster includes a snake woman with snake hair, a skeleton, a big cow-guy and a dude with a raven’s head. Even though Tournament of Legends doesn’t employ any authentic historical characters, it does utilize authentic Roman Numerals for most of the numbers in the game.

Tournament of Legends implements waggle attacks for those players using a Nunchuck/remote combo, but there’s also a classic-controller configuration. Battling is performed through blocks, attacks, and a handful of specials. You can combine specials and waggles to exploit lethal IV-hit combos, but there are no grapple moves to speak of. There’s not a lot of depth here, so even when you know how to use the controls it’s almost more fun to button-mash just to see what happens.

Depth is obviously not the name of the game, hence the minigames and quick-time events, which are injected into ToL at random. They’re probably intended to give the game that characteristic family-oriented Wii feel, but they end up feeling more like commercials than gameplay. Though the minigames detract from the pacing, they’re not all bad.

Take, for instance, arena monsters. Each arena has a huge creature that will interrupt a fight to deal out massive damage to any idiot too stupid to complete one simple quick time event. Because the concept is so ridiculous, it’s actually kind of amusing when you get to dodge a giant crab by pressing a single button.

At other times the QTE’s just suck. Like when an opponent falls, and you have a brief opportunity to taunt them, via a quick time event, which in turn raises your health bar. This is done I/II –assed and you’ll be forced to hear the same taunts over and over again or risk losing the match.

Ultimately, everything in ToL can be learned and mastered in a matter of hours, which is perfect because that’s about the maximum amount of time it can be fun for. There are only III different play options that all boil down to the same thing. Single system II-player might be fun if you can trick any of your friends into playing. Though the game is charming in a special sort of way, at full retail, the price is steeper than the off-brand Mount Olympus the legends are fighting to save.