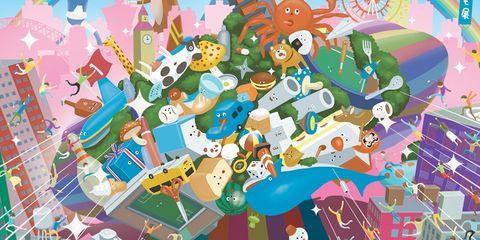 The premise of the Katamari franchise sounds downright frightening. The King of All Cosmos orders his son, the pint-sized Prince, to roll around a ball that sticks to anything smaller than it, growing in size until it's eventually rolling up entire cities in seconds. Screaming children, animals, trash cans - they're all added to the giant mass, which is eventually devoured by the flamboyant King and turned into a star. Literally. He eats the mass of people and turns them into a freaking star.

And yet, it's presented in a way that's not horrific, but playful, fun, and downright charming, with remarkably catchy music and a fantastic personality that makes it impossible to put down. Touch My Katamari continues this trend on the PlayStation Vita, bringing the crazy, zany Katamari world to handhelds flawlessly.

Generally speaking, we don't have the highest of expectations when it comes to innovation in Katamari games. We expect to roll around a ball and grow in size as we pick up varying objects. That's it. Anything else risks ruining the formula, and that's not a risk we'd be willing to take lightly. Imagine our surprise when Touch My Katamari not only managed to keep the typical formula working perfectly, but did so while adding in a few new elements that completely changed the way we played the game.

Using the front or back touchscreen, we're able to stretch the Katamari vertically or horizontally. Flattening it out makes picking up lots of small objects a breeze, while squishing it helps us get through narrow areas and reach higher places. These functions are especially useful in the special levels, which required us to carefully pick up specific items while avoiding others. It's a seemingly minor change that adds a load of depth to Touch My Katamari, and it's likely the biggest enhancement to the formula since... well, the first game, actually. Yeah.

Above: No one ever said Katamaris have to be round

Other additions didn't really do nearly as much for us, as they really didn't provide anything besides a minor distraction. Being able to collect items to dress up the Prince and the King were funny at first, but once we'd dropped a new cape and a top hat on the King we felt like we'd seen all we would ever need to see of that feature (until we unlocked the monocle, but then we totally stopped - seriously this time).

The other new, Vita-specific feature is the ability to control the Katamari with the touchscreen, literally touching the Katamari to roll it. Needless to say we stopped trying to deal with that after only a few minutes. It technically works, but it's simply not as precise as using the analog sticks. Plus, it meant covering up the screen, and who wants to do that? We might miss the a strange quip from the King!

Above: We're not even going to talk about how cliche that Fashion Stylist is

But after we'd rolled all there was to roll and concluded the humorous side-plot (involving an otaku nerd being inspired by Katamari Damacy to study) we were really let down by how little there was to do. The Katamari formula is there, the changes are fantastic, the music is stellar, and the King's bulge is as mighty and noteworthy as ever, but there just weren't enough levels. After a few hours we had run through all of them, and while there was still plenty to collect and perfect, the credits had already rolled (no pun intended), and we'd seen all of the locations. A handful of additional levels would have made a huge difference, fleshing out the experience and relying less on repeating older locations.

We also think it's time that the series tried branching out in some ways, potentially adding some user-generated content features. Don't get us wrong, we don't think the developers need to reinvent the Katamari, but letting players create their own levels would definitely help squeeze a few more hours of enjoyment out of the game, especially considering how simplistic the environments really are. It seems like the Vita would be the perfect platform for that, with all of its touch-based shenanigans, but it's absent, leaving the us with less content than we'd like.

Above: Look out, kitties!

That said, the game is relatively cheap when compared to other Vita launch titles, so we're not that upset with the amount of content we found. Only a little.

Despite being light on levels, the replayability and charm of Touch My Katamari is likely enough to keep gamers interested for months to come. The changes shrinking and expanding add to the formula shouldn't be downplayed, as they really are the most significant additions since we first laid eyes on the wide-faced Prince, and we're happy to see the developers experiment with great success to create one of the most charming entries in the series yet.