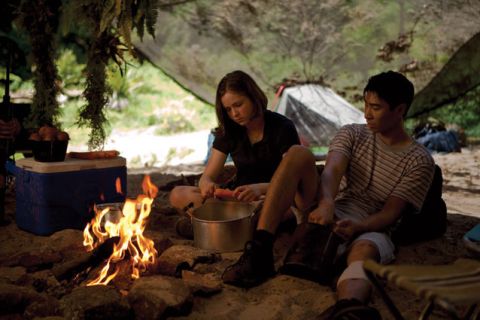 Given globalisation’s inexorable march, the idea of an invading army creeping across a neighbouring country’s border in the night seems like some Cold War throwback.

But that’s the premise we’re asked to swallow in this clumsily titled Aussie Red Dawn redux based on the first of a series of risible but popular teen novels by John Marsden.

A group of photogenic kids from a fictional small town named Wirrawee head off to the Outback for a week of camping. Naturally, each fits a specific pigeonhole: the innocent, the bad boy, the religious one, etc.

During their excursion, they see unfamiliar military planes overhead and when they return home, the entire neighbourhood has been taken over by some nefarious but unknown Asian army.

If the kids ever want to see their parents again, they’ll have to beat the baddies. How? Well, among other things, with exploding lawnmowers…

The directorial debut of Stuart Beattie (whose screenwriting credits include the Pirates movies and Australia), this is an impressive-looking film, but unfortunately, handsome production design is its main asset.

Every character is a stereotype, every line cringe-worthy and every plot twist goofier and more preposterous than the last.

T,WTWB was Australia’s highest-grossing domestic movie of 2010; sequels have already been green-lit, but the jury’s still out whether this will succeed elsewhere. One thing’s for sure, kitsch lovers are in for a treat.