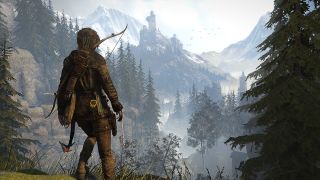 Plenty of games globetrot around the world, but one of the first was Tomb Raider with its hot-headed heroine, Lara Croft. From jungle ruins to European cities, there's few places our adventurer hasn't been in pursuit of those elusive relics. We've reviewed the stamps on Lara's passport to bring you 20 years worth of tourism highlights.

North America, with its mirage of bright lights and buildings, isn’t a frequent pit-stop on Lara’s travels and it’s easy to see why. This is a series called Tomb Raider after all, not Casino Raider. But Tomb Raider 3 manages to squeeze some mystery out of the New World in the form of Nevada’s ghostly terrain. Pockets of quicksand wait to gobble Lara up while rattlesnakes lurk in menacing coils.

Who can forget the eerie first four levels in the original Tomb Raider? In her first gaming adventure, Lara travels to Peru searching for the tomb of Qualopec and a mysterious artefact called The Scion. In a twist, dinosaurs are also roaming the plains, and Lara’s smackdown with a raging T-Rex has become one of the series’ defining, if ludicrous, moments. Peru is also a twisting cavern of caves and waterfalls, with hungry wolves and spiked traps. Lots of dazzling locations followed, but Peru is one of the best.

After Angel Of Darkness almost derailed the series in 2006, Tomb Raider was passed from Core Design to Crystal Dynamics. The dev’s first attempt at the series, Legend, brings Lara back to her mythic roots in the cloud-misted mountains of Tiwanaku. A ruined city that dates back to 1500 BC, Tiwanaku is the perfect playground for Lara, with a secret temple full of dark corners plus puzzles and a potential portal to Avalon.

One of the strangest locations in the entire series takes Lara back to English shores. Not to London, mind, but Cornwall. You what? In a dilapidated museum about King Arthur Lara uncovers a sliver of the old guy’s sword and a weird sea monster she has to vanquish. It’s all a little strange, but joyously kitsch. The best part is wandering the museum, watching creaky puppets act out epic battles.

We get it, okay? No one likes Angel Of Darkness. The gameplay is so frustrating you want to lob your controller across the room and the story fails to inspire the wide-eyed wonder of its predecessors. But that doesn’t mean the setting isn’t superb. Swapping the humid, sun-streaked locations of past instalments, the inky Parisian setting is moody and Gothic, like a labyrinth of of alleyways and balconies. Lara even gets to visit the Louvre. Not to admire any great works of art, mind, but for potential raiding.

Lara’s sojourn to Venice was the first level set in a modern city. It’s perfect: ripe with history and a rippling maze of canals. Unfortunately, Lara’s not here to wander the promenade or visit Saint Mark’s Basilica. Instead, she has to take down a mob boss called Marco Bartoli and try not to get eaten by gangsters’ dogs. Talk about killing the holiday buzz. Lara does get a chance to race down the canals in a speedboat, though, in a sequence that feels like it’s been plucked from a schlocky action movie.

When you think of Greece, you probably think of golden fields and glittering water. Well, forget about that as the Greece levels in Tomb Raider are completely subterranean. In the first, Lara finds a ruined monastery called St. Francis Folly where she must solve puzzles in four rooms to win the keys of the ancient gods Damocles, Thor, Atlas and Neptune. Each one is themed and similarly fatal: Thor’s room wields a giant hammer that almost squishes Lara to bits and Neptune’s fills with water and almost drowns her. Dear God, indeed.

Ghana is classic Tomb Raider territory, with a humid jungle and ancient temple hidden behind a waterfall. It’s a grandiose adventure that echoes the locales of the first game but with updated graphics.

After the world-spanning Tomb Raider 2 and Tomb Raider 3, The Last Revelation is set almost entirely in the tombs of Egypt. Going between Alexandria, Cairo, Seth and Khamoon, Lara searches for a selection of artefacts while evading mummies, crocodiles and traps. The Last Revelation brings Lara back to her roots but it feels like the forgotten sibling.

Lara visits Kazakhstan to research Project Carbonek. We say ‘research’ but not the kind where you spend the afternoon in an amber-lit library. No, Lara of course is hurtling down trains on a motorcycle and vaulting through the vents like a Russian spy. It seems that quiet academia was never Lara’s cup of tea.

Siberia - Rise Of The Tomb Raider

Tomb Raider is a series associated with hot climes: the arid desert and leafy jungles. While she does experience a brief trip to Syria, most of ROTTR is set in the tundra of Siberia. This is a landscape punctuated with snow-capped mountains, harsh winds and glaciers. Oh, and there’s also a murderous cult looking for the source of eternal life and grizzly bears that you have to take down with poison arrows. Why couldn’t Lara just stay home for once?

You know what Lara’s like, chilling around the Great Wall of China on her days off. Actually, she’s here to find the Dagger of Xion, which legend says the Emperor of China used to turn himself into a dragon. No big deal or anything. So, Lara’s come all the way here, but instead of a tour guide, she finds a cavern of cobwebs and skeletons, strange silver keys and a dying Italian gangster who bleeds all over her boots. Gross.

At the beginning of The Last Revelation, 16-year-old Lara and her weird, creepy mentor, Werner Von Croy, are looking for an artefact called The Iris. Angkor Wat is a great location: a complex of temples originally built for the worship of the ancient god Vishnu. Lara is having fun like a lot of teens do, but Von Croy keeps stopping her for endless anecdotes and boring pearls of wisdom. We were glad when Lara left his sorry butt behind to get smooshed, to be honest.

The Tomb Raider reboot has the distinction of being set in one location: the fictional island of Yamatai in the Dragon’s Triangle. A young Lara is shipwrecked there during her first expedition, and discovers a shamanistic cult worshipping a deity called the Sun Queen. The classic globetrotting may be absent, but you never miss it as Yamatai is one of the richest and most brutal settings in the entire series. It’s a paradise of lush forest, opulent temples and scattered ruins, but also hits Lara with violent storms and rivers of blood. You probably won’t find Yamatai on TripAdvisor, then...

Kimberley is production editor on Official Xbox Magazine. She lives in a mermaid lagoon but occasionally comes onto dry land to play indie games and watch trashy movies.
See comments