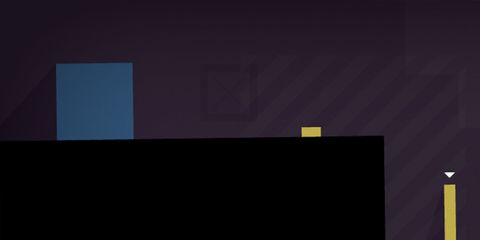 When given the right motivation, it’s easy to imagine a pile of polygons on a TV screen as an actual character. Indie title Thomas Was Alone takes that kind of projection to an experimental place, by asking players to identify with blank squares of basic color. Through a novel combination of puzzle-platformer gameplay and witty narration, the game makes you invested in the fate of a group of silent rectangles.

As the title would suggest, the game starts with Thomas all by himself. The small red rectangle is trapped within a defunct computer program, and he’s just starting to learn how to explore the 2D world in front of him, which gives him a feeling of nervous wonder. But how could you know what this blank red rectangle is feeling? The game imbues that empty vessel with a ton of personality, thanks to a Hitchhiker’s Guide to the Galaxy-style British narrator.

The unidentified speaker’s droll descriptions of Thomas’ inner thoughts immediately add depth to the character. The writing creates the same connection when you meet Chris, Laura and the rest of Thomas’ angular new pals, and that understanding is further enhanced by an engaging and fittingly minimalistic soundtrack. By the campaign’s end, the collection of disparate shapes is more memorable than many of the realistic looking humans we meet in most games.

These cubes’ quest for answers and self-discovery starts like a simple platformer, as Thomas learns to hop from one end of the stage to another. Over the next 10 chapters, the game gradually introduces new partners for Thomas’ journey, each with their own unique skills. Some jump higher, some are short enough to squeeze through certain passages, and one helpful fellow can float in water. If the writing didn’t already differentiate the characters, their separate skills keep the standard platforming gameplay fresh.

A stage can only last a few minutes if you can think fast enough, but it isn’t complete until all characters reach their own exit, making Thomas Was Alone a single player co-op adventure to keep your party together. You're swapping between characters constantly to find the correct path out of a stage. Sometimes the solution is as simple as creating a stairway for the weaker jumpers of the group to climb up to the top of platforms, but others are a multistage process to get each team member in the right space across a huge area. And as your team is continually adding new members, your continually growing options keep the puzzles from getting too predictable.

The variety of abilities keeps you on your toes, but none of the stages are too daunting. The game introduces you to your new teammates at a natural pace, so you never feel like a solution is out of your grasp. Some of the final stages might seem like they'll twist your brain into knots, but as long as you remember all the tools at your disposal, the answer isn’t far away.

No one would mistake Thomas Was Alone for a AAA release, but don’t hold its relatively short length and abstract graphics against it. The game plays to its strength with clever puzzles and cleverer writing. Once you get to really know these mild-mannered cubes, you’ll want to follow their adventure all the way to the end.

This game was reviewed on the PS3.