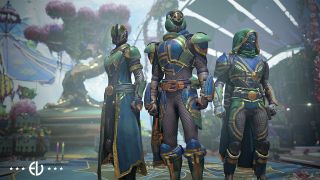 Here's a sentence I never thought I'd write: there's an official Destiny-themed cookbook on its way.

Written by Victoria Rosenthal – whose also penned a Fallout 4 cookbook and writes a videogames-themed cookery blog – the Destiny: The Official Cookbook is said to "explore recipes inspired by Bungie's hit franchise".

"Based on Bungie's acclaimed video game series Destiny, this official cookbook is filled with recipes inspired by the Guardians and locations seen throughout the game's expansive universe," explains the blurb accompanying the Amazon listing (thanks, PCGN). "Eva Levante has travelled around the world after the events of the Red War, gathering a variety of recipes after crossing paths with many Guardians along the way and learning from their adventures.

"Craft, mouthwatering food from her diverse list of recipes inspired by the game's unique world, plus step-by-step instructions and full-colour photos, help guide and inspire fans to go on their own culinary adventure through the solar system."

The listing finishes on insisting that the cookbook is "perfect for all Hunters, Titans, and Warlocks" and is "packed with amazing recipes and stories that celebrate Destiny's vast multiplayer universe".

Though it sounds like the perfect holiday gift for that hard-to-buy-for-Guardian in your life, sadly, we won't see the fruits of this labour until next year as the cookbook is due to release on August 4, 2020, priced at $35USD / £27GBP. It's available to pre-order now, though.

If it doesn't contain a dessert recipe called Lucky Raspberry then I'll be sorely, sorely disappointed.

In other Destiny news, Bungie recently confirmed to GamesRadar+ that it has "no plans right now to have Destiny 2: The Collection available outside of Stadia", adding that it's "pretty easy to find ways to be content complete" without needing a new dedicated collection.

As Austin summarised earlier this week, the rumour bubbled up when Destiny 2: The Collection – which has only been announced for Google Stadia Pro so far – appeared in the latest batch of PEGI ratings, intimating it was heading for release on PS4, Xbox One, and PC, too.

If you're looking for hot tips on the best of the Black Friday picks this year, check out our roundup of the best Black Friday game deals.