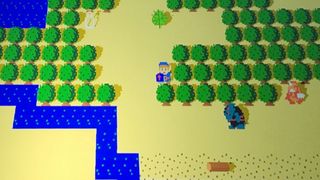 During a presentation at GDC, Nintendo revealed that The Legend of Zelda: Breath of the Wild was prototyped using the classic 2D, top-down style utilized by the 1986 original. Or was it?! Yes. No. Kind of.

Hidemaro Fujibayashi, director for Breath of the Wild, told the audience that the team wanted to turn The Legend of Zelda from a "passive" experience into an "active" one - that meant building a world where the player could interact with objects more freely, and the objects would in turn react to the world. For example, players can push a boulder all the way to the final boss, Fujibayashi explained. It's also why grass can be set aflame, and trees can be chopped down.

The fastest way to test these ideas and present them to the team was via the classic top-down engine. Only, plot twist, it was actually a 3D prototype running Breath of the Wild's simulations and engine. In this way, the team fused past and present designs to make a better Zelda game.

Now, this is absolutely not confirmation of Super Zelda Maker being a thing. But Super Mario Maker was once an internal development tool as well, long before it became a proper game. And considering that Nintendo sold more than 5 million copies of Super Mario Maker across Wii U and 3DS, the company might be eager to replicate that success with other franchises. So there's hope.

If nothing else, this serves as a cool behind-the-scenes peek at how Breath of the Wild was made. At the same time, I can't help but wonder, would you be interested in a hypothetical Super Zelda Maker?