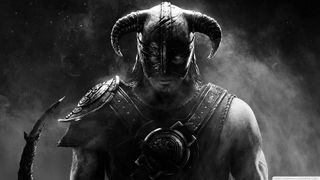 I realised how much I adore Skyrim the same moment you probably did. The trailer for the Special Edition, revealed on Sunday at Bethesda’s E3 conference, showed a stony path in the PS3 edition, before wiping to the ethereal PS4 remake. The music hit, dragging me back to the game’s outstanding moments. Hilltop dragon fights; venison chops devoured by firelight; finding a sad dog in a shed. Hundreds of hours of exploration and adventure, woven into a grand tapestry. It was only when I went back hours later to that I noticed something odd.

The trees weren’t moving. It’s a bullshit thing to care about. It has no bearing on the richness, majesty or scale of the game. Nobody ever played Skyrim wishing for swishier trees. (Well, almost nobody.) But it's a whispered reminder that Skyrim comes from a different era. It’s only five years old, but it’s foundations feel far older. It’s not just the trees - in fact, they barely matter at all. While Skyrim was sleeping, fantasy quietly became the most widely served and sophisticated genre of speculative fiction. There are loads of examples, but I’ll pick two.

Game of Thrones changed how most people see fantasy, bringing it to an audience who’d previously punch you for even thinking about doublets. I’m not suggesting it’s the only popular fantasy show, nor that it added depth to a previously lightweight genre. Instead, we can thank George R.R. Martin for popularising that blend of magic, monsters and political savagery.

When I squeezed into my friend’s basement to play Warhammer Fantasy - underwear still bunched from the wedgies - I never expected that years later the same bullies would excitedly be spoiling Game of Thrones on Facebook, or forcefully explaining Cleganebowl to strangers on the bus. Kids at school probably get wedgied now for not talking about the Doom of Valyria. Game of Thrones crystallized something we already knew: fantasy is fucking awesome.

For games, the obvious choice is The Witcher 3. The Bloody Baron is the new standard against which all fantasy quests should be measured. I know more people who play Gwent than play poker. And with Blood and Wine, it just keeps getting better.

Everything you know about fantasy games is subverted within the first five hours of The Witcher 3. Mislav, a hunter you meet early on, is a great example. He mentions he was cast out because of an affliction. Geralt immediately assumes the most obvious high-fantasy answer: lycanthropy. The real reason, however, is that Mislav is gay, and society won’t accept it. It encapsulates everything that makes The Witcher 3 so good. It knows and loves the same fantasy tropes you do, but is never bound by them. It becomes a more powerful by breaking the established rules. How can Skyrim, however volumetric its god-rays, ever hope to compete with that?

The addition of mods will help. When I was done with the vanilla game, I modded the PC version to add actually-giant Giants, campfires and even a hypothermia mod. Skyrim’s empty spaces, given the direction of some thoughtful mods, offer scope for invention and imagination rivalled only by actual pen-and-paper RPGs.

Most helpfully, Skyrim is still brilliant. Classic high-fantasy worlds, full of orcs and dragons and ancient prophecies, are always in peril of being predictable, but Skyrim brings nuance and choice to a 200-hour adventure that constantly makes you feel amazing. The shocking moments don’t hit with the same ferocity as The Witcher 3, but perhaps that’s a good thing. It’s a dynamic game. The time spent wandering alone in the wilderness makes the warmth of a tavern seem more welcome. My memories of Skyrim are personal, and I let my mind fill in the gaps left by rickety combat and cardboard NPCs.

The beauty of Skyrim, and of all Elder Scrolls games, comes from things that aren’t planned. There are fewer shocking deaths to spoil than in Game of Thrones, but I can kill any NPC and live with the consequences. The story is clumsier than The Witcher 3’s, but at least it’s mine. The small moments resonate. I remember seeing Mehrunes Dagon fight a dragon at the end of Oblivion, but it means less to me than helping Percius Mercius clean out the Fighter’s Guild in Morrowind, and getting his old armour as a reward.

That’s why the thing I’m most looking forward to in Skyrim Remastered isn’t dynamic depth of field, or screen space reflections, or better snow: it’s an excuse to return to a place I always loved and see it look better than ever. The first thing I’ll do is step off that stony path, climb a hill and watch the sun set. It’s a game that prioritises freedom, and that will never get old.