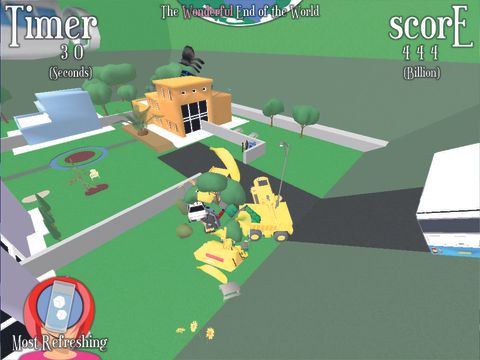 There’s no denying this is inspired by Katamari Damacy: both share the idea of a thing moving around a landscape, collecting objects to add to its bulk. But we don’t have the PlayStation’s strange adventure game on the PC, so TWEotW will have to do.

And it does. In the face of an impending apocalypse, brought about by a giant fish head, you must collect all the nice things you’d like to take with you. Your body will be defined by the things you collect. All you do is walk over objects and you’ll magically gather them up: dogs become feet, tables make up shoulders, and your character grows with every item. You start equal in size to the smallest things in the level, and the size of the level will determine the size you grow to. In some you’ll never grow taller than the room you’re in, in others you’ll be a colossus striding over houses with buses for feet, trees for a torso and dinosaurs for abs.

So what drives you forward? As you expand, more of the level becomes available because things that once hemmed you in will now fall under your bulk. It’s an affront to bump off things in this game, an insult that tells you you’re not good enough to pass, and that you must go collect more things. Return later and the presumptuous blockage is sucked up into your mass.

Sounds silly? You don’t know the half of it: the game’s raison d’etre is described in a rap song over the title screen. Suburban levels will happily incorporate picket fences and gorillas. One level is made up of words printed on white blocks, like it’s broken free from a U2 concert circa ’93. It’s a continual surprise. The randomly popping-up objects are a complaint, and you’ll get stuck on occasion, but it’s otherwise a great little indie game, perfect for when you have ten minutes to spare.