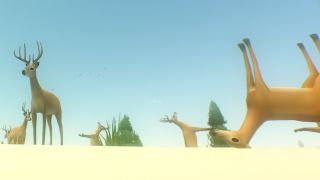 As part of my job, I often write about games you're already aware of, covering new features or characters or what-have-you. But sometimes, you and I get to discover something together at the same time. Something new and different that makes us both scratch our heads and say "I honestly don't know what to make of this." This is one of those times. Behold, a trailer for the game Everything.

Everything is a game by David O'Reilly, who you may recognize as the man behind Mountain - a PC and mobile game where you … well, you don't really do much. It's a "mountain simulator," and it is oblique as hell. So in that context, maybe Everything, a game where you roll around as a bear, and then grass, and then a bacterium, and then the universe, and it's all narrated by the British philosopher Alan Watts, doesn't seem so strange.

No, it's still plenty strange. But it's pretty damn cool, too. Everything will be available on PS4 on March 21 for $15.