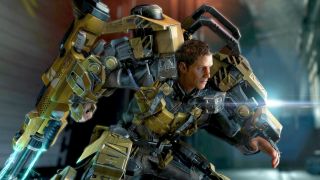 The future isn’t clean. Behind the slick spaceships and spotless body armour are hordes of workers toiling away in factories, making the sleek, Mass Effect-style tech. Sometimes something goes wrong. A loose screw, a broken finger - or, y’know, a catastrophic operating failure which causes the exo-skeleton-wearing workers to go homicidally insane. Welcome to The Surge.

Out on Xbox One, PS4, and PC in May, it puts you slap-bang in the middle of an industrial complex gone haywire, with robots, workers, and other futuristic gadgets set on destroying you. It might be your first day on the job, but you’re already (apparently) a top-tier security risk. I tried my hand at The Surge and came out the other side bruised, beaten, and more than ready to talk to Adam Hetenyi, head of Games Design and all-round robot-killer.

What is The Surge?

Playing it hands-on gave me a definite futuristic-Dark Souls vibe. Unforgiving combat pushes you to time your attacks, enemies respawn following each inevitable death, and environments tell you a story without saying a word. Elements of the world are meant to be unnervingly familiar: with exoskeletons, manual labour, and functional surroundings the world is recognisably set in the near future which isn’t hard to imagine being right around the corner. Which made the fact that I got ripped apart by exo-skeleton zombies just a tad ominous. “Not so many sci-fi games go in this kind of gritty, industrial direction”, Hetenyi says, making “The Surge a bit more grounded” that most futuristic games.

What sort of enemies are skulking around?

“Death is a wonderful teacher in these sorts of games”, says Hetenyi. Ready to educate you are half-dead workers animated by their industrial exoskeletons, using their work tools to stab, slash, and pummel you to oblivion. Later on, when you get to the slick offices overlooking the facility, I was told you’ll be violently dismantling machines. Some are security bots, others are functional (like welding robots ready to discover skin + molten metal = pain), and - oddly - cleaning units. Each has its own moveset, armour, and weapons which you’ll probably get impaled by as you learn how to take them down. This isn’t a huge setback, though: your loot will drop exactly where you’re killed, with a countdown indicating how long remains until it disappears. Not that this means you have to sprint back to your tombstone: killing enemies on your way there increases the timer, rewarding you for sowing more mechanical devastation.

Prepare to git gud. “Quick and reactive combat” will keep you on your toes, with Hetenyi mentioning how each failure is meant to be a punishment - but not too punishing, in order to keep you coming back. Keeping you company on the factory floor (and making sure you don’t feel like everything is out to get you) is your very own drone. It’s up to you how you use it: draw enemies in with a single shot, or fully deploy your mechanical mate to have it fire ranged attacks for a short period of time. Equipping it with different abilities will change whether it kills with fire or lasers, providing a useful distraction or whittling away enemies’ health while you lay into them with a mining tool.

Careful that this drone doesn’t make you cocky, though. Take it from me: jump in too quickly without waiting for an opening and you’ll regret it. Making up for a rushed strike with a heavy blow won’t work either, as light and heavy attacks are consigned to the garbage compactor in The Surge, replaced by horizontal and vertical attacks. Why? These special moves allow you to target body parts: horizontal strikes lop off heads and legs, vertical slashes rid a body of its arms. If you build up enough combat energy by slashing through tons of enemies, you can trigger a borderline-cinematic finishing sequence that makes chopping off limbs look like ballet, as if you’re starring in the Nuts-and-bolts-cracker.

Different weapons have different finishing moves for each body part, along with distinct movesets: I got to decide between a slow hammer-like compacting tool, or a speedy electric lance. Hetenyi’s eyes lit up as he gleefully described some of his favourite moves: in one “you hold them down with your weapon and tear the leg off with your powered exo, and then the other one you trip them and then cut their head off – it’s like a big Viking slam finishing move”. Spare limbs laying around don’t go to waste either with The Surge’s crafting system.

There sure is! Say you see an exoskeleton-zombie lumbering towards you and take a shine to its helmet. Target its head enough will chops it off. Continue doing the same with the same type of enemy, and eventually you’ll learn the schematic to build the helmet. Then all you have to do is gather enough components to build the thing, and you’ll be wearing it in no time. Or, if the sight of the baddie’s electric lance made your eyes widen, you can always snag its weapon instead.

Collectophiles rejoice (or whimper, depending on how you look at it…), as Hetenyi revealed you can get every armour set - if you put the time in. Striding down this path adds another tactical layer, he continues, as the crafting progression of fighting changes how you’ll deal with each menacing machine. “The amount of time that you’ll spend building up your gear, upgrading your gear, keeping pace with the challenge curve all is part of the bargain of the game”, Hetenyi says. With increasingly more dastardly enemies thrown your way, the best way to trump them is to harvest some high-levelled armour.

Okay, so I can kill and craft. But why am I there in the first place?

Something has gone horribly wrong. God knows what exactly happened, and with it being your first day on the job, you’re the last person who’d have any clue. Miraculously you’re the only worker not affected by the facility-wide short-circuit. Audio logs scattered around add what Hetenyi calls “multiple layers to the story, telling you what was happening in the complex before everything got messed up, what happened during it, what happened after”. Littering the multiple computers laying around are diary entries and emails which will flesh out the backstory even more. Hiding away are “also NPCs who have lived through this situation that you can interact with or do things for them and they can do things for you”. Anticipating my next question, Hetenyi shrugs and says, “or you can kill them I guess. If you’re a heartless person”. Ahem. But be warned, as he went on to say that you’ll only get information from NPCs by having conversations with them.

By the sounds of it, most of the NPCs are from the top tiers of the company, as Hetenyi reveals that you’ll be on “a little bit of a rescue mission; people there are attacking you, you’re trying to get to the leadership of the company”. Instead of being down in the decidedly gritty factories, they’ll be waiting in their pristine, high-tech office areas. Hetenyi describes these as, “dangerous in its own way, but not in the same way as the factory floor. The management’s been trapped there, and as they have control over the whole place, you’re hoping that if you can get there you can get some answers, and maybe find out more and save them”. Mysterious remarks from Hetenyi indeed. Multiple endings lay open to you as well, which he said are “based on particular story points – like if you decide to do this or decide to do that”. Presumably what you decide to do with some of the NPCs will have an impact on how The Surge ends, so you’ll be able to replay it enough times to feel like Tom Cruise in Edge of Tomorrow: Live Die Repeat (complete with your very own exoskeleton).

The Surge has plenty of mechanical destruction on offer, so keep your eyes peeled for when it hits Xbox One, PS4, and PC in May 2017.