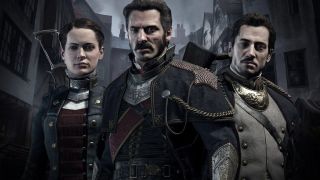 The surprising rumour that there's a The Order: 1886 sequel heading to PS5 and Xbox Series X is an odd one, but you know what? I'm into it. I flexed hard on the original when it came out – its incredible beauty felt constrained by a straightjacket of bizarre gameplay limitations. But looking back now, and returning for another play, it feels like hype might have been the real monster here; expectation mauling The Order: 1886's reception more than any of its werewolf enemies. It's not as good as you'd hope, sure, but it's not the worst. There's a character and substance to it that I am here for, even now. The concept behind The Order 1886 always stayed with me, if not the execution, and I would love to see the idea given another chance.

It's possibly because I love alt history, but also because The Order: 1886 was (and is) a different proposition from a lot of the other games that are out there. Big budget games tend to follow trends because that's where the money is (another reason why an Order sequel might be happening at all: a known IP is a safer bet compared to an all new name). A lot of sci-fi, fantasy and action settings don't branch out much in terms of time period and settings, so The Order's Victorian world of stiff upper lip London gripped by civil war, and filled with airships, monsters and steampunk guns was a great break from tradition.

Even now those guns bang. The electric arc rifle is slow and unwieldy to use for sure, but the death-tongue of lighting that licks across enemies is worth it – limbs and heads popping in a wet splash that's about a 60/40 mix of 'again' and 'immediate disgust and regret'. The thermite rifle is a similar piece of clunky brilliance, projecting a cloud of flammable gas at enemies you can ignite separately to burn your troubles away. Yes, it's like someone sat down to design the least efficient way possible to win a shootout, but by God it never gets old.

Even the characters felt a little different and interesting, mainly because of the excess of moustaches and the 'I say good sir' dialogue used to hammer home the Victorian setting with all the subtlety of a really big pointy rock. Most of the enemies sound like Mary Poppins era Dick van Dyke if he said 'fuck' more, and while no one actually swishes a cape as they exit stage left, you can tell they're all thinking about it. Melodrama aside, there's a sense of Captain Price's earthy gruffness to the lead, Grayson, with a starched formality to his relationship with the other characters. He exudes an aura of 'no nonsense brusqueness but cares deep down' like a soothing musk.

The story itself is pure alt history supernatural hokum in the best possible way and I love it. In The Order's history, humanity's early evolution split between mankind and 'half-breeds', animalistic shape changing creatures known as Lycans. So, basically, werewolves. King Arthur and the Knights of the Round table were really a group of warriors formed to fight back against half breeds and save humanity in medieval times. Their discovery of Black Water was the only thing that turned the tide on a losing battle – allegedly from the Holy Grail, Black Water grants Knights of the Order increased strength, healing and lifespans (Grayson is around 400-years-old). Fast forward to 1886 and the Order are basically James Bond meets Spec Ops for monsters.

On paper at least everything looks great, which is why a sequel isn't such a crazy idea. It's another chance to take all these ideas and weave them together more effectively, and with none of the bizarre choices the first game made. The Order: 1886 felt like it fumbled the ball with a mixture of odd design choices and a sense that everything was made against the clock towards the end. Cover based gunplay makes up nearly all the action, for example, with an oddly gluely wall hugging trading of bullets that, like most of the game, isn't bad, just not quite good enough. Outside of shooting you're forced to walk through incredibly beautiful scenes at an incredibly slow pace, picking up endless objects to look at. Mainly, as far as I can tell, because the studio put a lot of effort into making stuff look nice and it wanted people to notice.

It feels at times like developer Ready at Dawn didn't really know what to do with the player agency in the world it was building, outside of combat. For a studio founded by ex-Naughty Dogs, and staffers behind the excellent Daxter and God of War games on PSP, it feels like an oddly mishandled creation. You're practically on rails most of the time, moving through narrow corridors, or effectively animating in-game cutscenes by pushing forward on the stick. There's a few locks to pick, a button matching monster fighting mechanic that appears once at the start and then again at the end as the final climatic boss encounter and, over all, it feels like a game that didn't have time to do what it wanted, and instead filled the space with what it had.

A casual mention of vampires part way through the game is one of the biggest hints there was more planned. For a story that focuses on nothing but 'man vs Werewolf', a shrugged admittance other monsters exists is a warning flag that The Order was originally fighting all forms of supernatural creatures. It makes more sense overall that Queen Victoria's immortal creature police have a catalogue of threats to deal with. The rumoured sequel leak mentioned a creature with four arms, suggesting a new monster, and hopefully an expanded list overall.

Basically, if The Order does come back it's worth giving it a chance. The original might not have stuck the landing, but that could well have been more to do with deadlines, production issues, and some of its weirder design choices rather than problems inherent to the underlying concept. The idea was sound, and plenty of games deliver a so-so starter and go on to be amazing, while some of the biggest series around built their success on the firm foundations of a seven out of ten. If Ready at Dawn wants to try again, and give that world another spin, I will happily sign up to chase monsters through Jack the Ripper alleys with a shotgun that shoots fire.