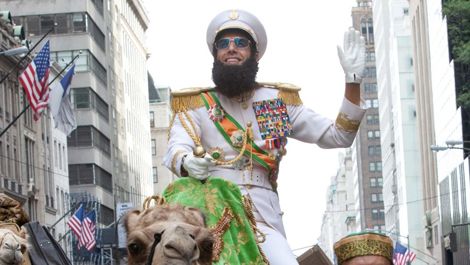 If close-to-the-bone humour is your thing, Sacha Baron Cohen’s latest is just what the dictator ordered. Crude, gut-busting gags come aplenty, with a sprinkling of satire as he delivers his first big-screen character to arrive without first gracing a TV show.

Reputedly based on Colonel Gadaffi, Admiral General Aladeen is the ruling leader of the fictional Republic of Wadiya.

The plot, crafted by Cohen and three Curb Your Enthusiasm alumni, follows the Borat and Brüno films, in that it takes Aladeen to the States.

Due to speak at the UN, he’s tricked by his trusted aide (Ben Kingsley), who is looking to install an idiotic double (Cohen, of course) to sign a democratic constitution. Aladeen escapes certain death (at the hands of John C. Reilly’s bigot), and befriends Anna Faris’ hippie-chick activist Zoey, as he attempts to foil the signing in front of the UN.

A film like The Dictator lives by the strength of its gags, and Cohen and co deliver a relentless barrage of politically incorrect rib-ticklers. Nothing is sacred, as child molestation and Rape Centres (“I’ll bring my raping shoes,” Aladeen beams) get the comedy treatment.

Unlike the pranks pulled in Brüno , when Paula Abdul got punk’d, these days, the celebs are also in on the joke. A running gag about a Chinese diplomat ‘cottaging’ with various Hollywood stars sees a surprise cameo, while Megan Fox briefly turns up as herself, albeit moonlighting as a high-class call-girl for Aladeen (cue Polaroid photos of past conquests, including Arnie).

Directed by Larry Charles, The Dictator lacks the improvisational punch of his earlier Cohen collaborations. While the lame love story between Aladeen and Zoey doesn’t help, it’s a case of quantity not quality here. You’ll laugh, but the groundbreaking feel of early Cohen is absent.