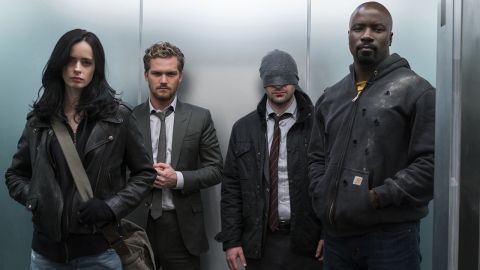 Endlessly entertaining and wonderfully stylish, The Defenders is Marvel at the peak of its powers – even if MCU’s persistent villain problem shows no signs of going away

The Defenders is Marvel’s best Netflix show, hands down. The series shows off its swagger instantly and never lets up, making Iron Fist seem like more of a hero in the opening 13 seconds than the standalone show managed in 13 episodes. While the crossover between Daredevil, Jessica Jones, Iron Fist, and Luke Cage can occasionally veer into a fragmented set of mini-episodes early on, the awesome foursome eventually unites to form a show greater than the sum of its parts. The street-level superheroes provide a fantastic eight-episode run with high stakes, a frenzied pace and, most importantly, effortless chemistry.

Things don’t start off that way, though. The opening pair of episodes read almost as a greatest hits collection of each hero’s respective shows before the narrative eventually relents and shoehorns the plot in a comically convenient way for the four to come together. The lack of instant gratification can be grating, but this is easily relieved by the fun interaction between fan-favourites that leads up to the team-up. Misty Knight and Jessica Jones’ brief scenes are worth the price of admission alone and there are a few, shall we say interesting, crossovers you won’t see coming. Sure, Claire Temple, despite having deeper motivations this time out, is a means to an end again (as are Jeri Hogarth and Foggy for that matter), but when the end result is this much fun it’s hard to look too unfavourably on Marvel’s use of periphery characters.

Without giving too much away, a cataclysmic event is unleashed upon New York (probably file it just below The Incident as something for people to refer to in future seasons) and The Defenders, each following their own leads, stumble into each other’s paths in the same building. And then things get good. Really, really good. I’m not one for hyperbole but The Defenders’ debut fight scene is Marvel’s absolute best. It bests Captain America: The Winter Soldier's elevator fight scene and pounds Daredevil’s corridor scene into submission. I could describe it but, frankly, words won’t do it justice. And, again, Iron Fist comes out of it looking incredible, which is no mean feat.

Unsurprisingly, The Hand are the villains of the season (Marvel must have them on speed dial), and are led by Sigourney Weaver’s Alexandra. Her performance is tempered by an unidentified terminal illness which spurs her character on and at least drives her away from the realms of cartoonish MCU villain as – gasp – she has an actual character arc rather than the bland go there, be evil trope of prior bad guys. The rest of The Hand don’t follow suit, though, and they are in serious danger of becoming the go-to generic baddies whenever one of The Defenders needs a physical villain to fight. It doesn’t help that Alexandra literally sits down and explains The Hand’s entire history and backstory in an avalanche of exposition at the midway point, almost as if Marvel execs thought ‘oh, crap, we need more info on these guys’.

Elektra, admittedly, does give a more personal bent at the side of The Hand – her combat abilities make her look like an absolute killer here and everyone involved should be applauded – but it’s hard to shake the feeling that the show is at its weakest when it deviates from The Defenders. Hopefully, this is the last time we see The Hand and their never-ending stream of martial artists, because their appearances are wearing thin.

When the show does focus on The Defenders (and, in fairness, that’s 90% of the time) the show is a rollercoaster of wisecracks, quips and, yup, Jessica Jones’ side-eye. It’s glorious fun and, for my money, feels like a much bigger event than The Avengers ever was. There’s a spine-tingling moment, complete with an inspirational score bubbling up in the background, where the four heroes unite to take on a foe at the midway point which ranks as an all-time great Marvel moment.

Yes, The Defenders run is short, but those thinking a mere eight episodes won’t cut it can have their fears put to rest. Coupled with Game of Thrones season 7's clipped seven-episode run, it feels like we’re reaching a watershed point in television where shows don’t need to be chained to a long episode run anymore. Barely a second is wasted in The Defenders: Every quiet character moment is poignant and fleshes out something or someone; every action sequence leads to something bigger, better, and more shocking; and every one-liner and on-the-nose dig at Iron Fist will make you laugh. Nothing outstays its welcome; the lessons have been learned from the meandering tempos of Iron Fist and Luke Cage.

This being a crossover, if you’re hoping for a superhero scrap or two then - mild spoilers here – there are a couple of times the heroes do actually face each other in combat. They aren’t throwaway sparring scenes or jokey jousts either. Once the tension rises in the final stretch of episodes, so too do the tempers of each of The Defenders. Get the popcorn ready, because one fight in particular is a proper knockdown drag-out brawl that will have you begging for more. It again highlights just how confident Marvel is with this show to not lead, or even hint at, any conflict between the quartet in the promos leading up to its release. Make sure you watch it before it gets spoiled. And that’s without mentioning the long list of spectacular fights elsewhere between good and evil. They’re chock full of amazing choreography and superb editing and keeps the show rolling along at an electric pace.

When the dust has settled and the final credits roll you’ll have witnessed something that, whilst it has a few (mostly Hand-related) clunky moments, presents the best-written version of each hero to date. Not only that, but the show doesn’t exist in a vacuum: Key, shocking events happen throughout and these guys (and one sarcy girl) develop considerably as people over the course of the series. So much so, that it makes their inevitable returns a genuinely exciting prospect. Daredevil undergoes perhaps the biggest transformation, but each Defender gets their own character beats to see them, as Luke Cage would say, move forward. Marvel’s biggest issue is the now have the unenviable task of following this remarkably fun, entertaining effort. This is a must-watch, and the perfect jumping-on point for non-Marvel fans.

Endlessly entertaining and wonderfully stylish, The Defenders is Marvel at the peak of its powers – even if MCU’s persistent villain problem shows no signs of going away