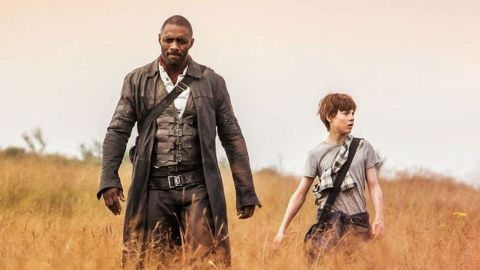 As baffling as it is dull, The Dark Tower is a disappointment for both hardcore fans and the King-curious. Stick with the books.

A Stephen King adaptation can go in just about any direction, really. According to IMDb users, The Shawshank Redemption is the greatest movie ever made. Killer-rat movie Graveyard Shift (1990)? Not so much. But this one was always supposed to be special.

Based on King’s beloved eight-volume series of cosmic gunslinger novels, The Dark Tower attempts to mash the whole sprawling saga into one bite-sized, easily digestible 95 minute stand-alone - one that also pays homage to other King-universe properties. It’s a massive overreach, in other words, that’ll bewilder folks who haven’t read the books and frustrate King fans who love the series and have been waiting patiently for decades for a big-buck adap.

A steely-eyed Idris Elba plays the film’s hero, a mortal but still kind of magical gunfighter named Roland Deschain. He’s sworn to protect the titular Dark Tower, a rickety splinter of rock jutting out from the centre of the universe that somehow keeps us all safe from the army of fire-monsters lurking just outside of our worlds.

Matthew McConaughey is Walter O’Dim, the famed and fabled “man in black”, an evil sorcerer with Grim Reaper-ish tendencies. O’Dim dresses like Blue Velvet’s Frank Booth and glides around like a dandified version of McConaughey’s Dazed And Confused character, indiscriminately kidnapping children and harnessing their “shine” to shoot lightning bolts at the Tower, determined to bring it down so that...well, the movie never clarifies exactly why he wants the devil-spiders to eat us all, but that’s what he wants.

Enter plucky teen Jack Chambers (Tom Taylor), who has troubling dreams about the two fantasy combatants, and eventually summons them both to Earth, where they fight it out on the streets of New York City for rights to his “shine”, whatever the hell that is.

Honestly, if you’re sitting there hoping the narrative will explain all the portals and zippered skin and why death incarnate looks and acts like a flim-flammy Vegas magician, forget it. Director Nikolaj Arcel scored international hits with the Oscar-nommed A Royal Affair (2012) and his screenplay for the original Girl With The Dragon Tattoo (2009); shame, then, that his first Hollywood gig has turned out to be a confusing dud.

There are a few slashes of action-movie flair here and there, most of it thanks to Deschain’s lightning-fast shooting skills. There’s also the odd moment of fish-out-of-water comedy (our hero’s perplexed reactions to things like hot dogs and Coca-Cola) that feel reasonably close to the folksy fantasy of King’s prose. But mostly this is just pedestrian nonsense than ends in shockingly trite fashion. Come back Maximum Overdrive (1986), all is forgiven...

The Dark Tower review: "As baffling as it is dull"

As baffling as it is dull, The Dark Tower is a disappointment for both hardcore fans and the King-curious. Stick with the books.