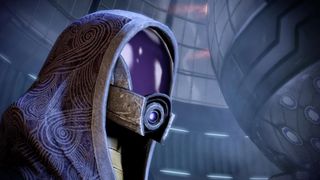 Mass Effect Andromeda is here, and – amid all the talk of animation quibbles, mixed reviews and (lack of) romantic options – it's easy to forget how much we love BioWare's sci-fi series. We polled the GamesRadar+ team for the series' most memorable moments – from the transcendental, to the tragic – across all three original games. Let us know your favorite memories in the comments below… and confirm that those feelings for Tali *weren't just us*.

"Having formed an image of Megan Fox with cybernetic implants, rumours she looked like George Bush only strengthened my resolve."

Like all right-thinking people, I spent the majority of Mass Effect 2 trying to romance Tali, the mysterious and elegant Quarian, who wears a protective mask at all times. It's not like I obsessed about seeing Tali's face, but having formed a dangerous mental image of Megan Fox with cybernetic implants, internet rumours that she might look like a fish, pig, or George Bush only strengthened my resolve. After 40 hours of combat missions and romantic conversations, Tali and I swore to meet after Mass Effect 2's end-game – the one-hour long 'Suicide Mission' (the clue is in the title). Heart swelling, dizzy in anticipation of finally seeing Meg… er, Tali's face, I fluffed the Suicide Mission's first big decision. The result? Just as it looks like all my squad-mates will scramble to safety, Tali looks back, the camera pauses, and  – in a moment I'll forever replay in slow motion – takes a rocket to the face. My only course of action was to replay ten hours of the game from my previous save, which – like a maniac – I did, despite the 1% chance that Tali was Zoe Saldana with a salmon's face. Dan Dawkins

"My Shepard, a hard woman in her early 50s, had a relationship with Garrus in Mass Effect 2."

Some people romanced the entire crew and kept it casual, but I tended to play Shepard as someone who needed sex to come from a real emotional connection in the Mass Effect trilogy. I pursued relationships based on which of the characters interested me and it took me, excitingly enough, to strange places. My Shepard, a hard woman in her early 50s, had a relationship with Garrus in ME2. I was amazed at how the writing and acting captured the real tenderness of two people talking frankly about how they liked each other and what to do about it, even going so far as to talk to a doctor to make sure there were no medical precautions they'd need to take (Mordin's just judgey enough to come off as a real doc too).

My favorite moment wasn't when the relationship was consummated but the aftermath. After Garrus finally joined back up with the Normandy crew in Mass Effect 3 - after he'd been fighting a losing war for his home planet - we called off our relationship calmly and honestly, like actual adults who had actually changed and realized it was time to move on. We'd been through a lot in a short period of time. We'd changed. It was one of the many moments where Mass Effect's characters felt less like archetypes and more like people with full and complicated histories. (The icing on the cake: before the final battle, I walked in on Garrus and Tali getting down! An awkward scene, but also played with great subtlety and compassion. Relationships change and Mass Effect nails that when its at its best). Anthony Agnello

"When I booted up Mass Effect 2 for the first time, I expected to jump right in and continue my galactic adventures. And then… bam."

Talk about starting your game with a bang. When I booted up Mass Effect 2 for the first time, I expected to jump right in and continue my galactic adventures. And that's the brilliance about this scene; it happens so quick, so early on, that you're still riding the wave of confidence from your previous acts of heroism. You think nothing could possibly touch you. And then bam, the Normandy is disintegrated and Shepard plummets into an alien planet's atmosphere and dies. Let me reiterate: You start the game by dying. The scene quickly establishes ME2's tone as darker than its predecessor, while simultaneously setting up the Collectors as a credible threat and providing some awe-inspiring views. A fantastic, memorable moment. Sam Prell

"The Mass Effect moment that's really stuck with me through the years basically amounts to a quiet afternoon of people-watching in the park."

My Commander Shepard's zapped countless hostile aliens, forged powerful bonds with her crewmates, and straight-up saved the entire galaxy - yet somehow, the Mass Effect moment that's really stuck with me through the years basically amounts to a quiet afternoon of people-watching in the park. Every time I visited the Citadel in the original Mass Effect, I'd inevitably spend 30-40 minutes wandering aimlessly through the idyllic Presidium plaza, taking in the sheer ambiance of it all. The vibrant foliage, sprawling lake, and sterile, stark white architecture of apartments and offices belonging to the elite all blend together to make for quite the serene vista, all eternally basked in the warm glow of a simulated blue sky.

As someone who lives for sunny, peaceful days, mulling about the Presidium was just the reprieve I needed from space escapades every so often. It's also one of the earliest (and best) melting pots for the races within Mass Effect's universe, introducing you to the soft-spoken, jellyfish-esque Hanar for the first time, as well as the mysterious, tirelessly toiling bug-beings known as the Keepers. But the best bit of all has to be the Presidium's music, which perfectly captures the awe and wonder of wandering a beautifully kept, densely populated space station. Lucas Sullivan

"She takes in the alcohol very carefully through an "emergency induction port," which is absolutely, most definitely NOT a straw."

The Citadel DLC gave us one last chance to hang with our Normandy homies before finally saying farewell. The entire crew gathers in Shepard's apartment, listens to music, reminisces about their adventures, and in the case of one Tali'Zorah, gets blisteringly drunk. In addition to acting out the sounds the Normandy and the SR-2 make, describing her rad tattoo, and nearly poisoning herself with cheese, Tali explains how she's able to get drunk through her mask. She takes in the alcohol very carefully through an "emergency induction port," which is absolutely, most definitely NOT a straw. She's the most adorably nerdy drunk you've ever seen, even when she's sprawled on the floor of Shepard's bathroom. Susan Arendt

"The best bit from the whole series is when Shepard finds Garrus in Mass Effect 3 and the pair shoot cans together while chatting about their adventures."

There are - as you've read by now - so many brilliant moments in Mass Effect. I recall the biggest beats from my own playthroughs, like Tali's tragic death and the choice between Ashley and Kaiden - as some of my favorite ever gaming memories. However, the best bit from the whole series, for me, is when Shepard finds Garrus on the 'roof' of the Citadel in Mass Effect 3 and the pair shoot cans together while chatting about their adventures. It's a moment of quiet reflection and perfect friendship in a world utterly consumed by Reaper chaos. Two buddies seeing who can shoot cans more accurately while remembering the past and gently avoiding the fact that they'll soon embark on a mission that will separate them permanently, and (as we know) end Shep's life. It's such a beautiful piece of pure bonding, topped off by the fact that you can opt to miss the final shot to let Garrus win and feel like a champion. Because you love him, you treasure the 100s of hours spent together over these three games, and want to see him happy one last time... *sniff. Andy Hartup

"She and I lived for the violent administration of justice, and I hoped that one day we might deal righteous fury across the galaxy together."

My favourite Mass Effect moment, somewhat predictably, is a story of failure. None of the romance options in Mass Effect 2 clicked for me. Miranda was too sassy; Tali was like a daughter; and Mordin, despite our shared love of showtunes, just wasn’t into me. Instead, I tried to romance Samara. We had so much in common. She and I lived for the violent administration of justice, and I hoped that one day we might deal righteous fury across the galaxy together, ideally while holding hands. It wasn’t to be. But the fact the game let us come so close before turning me away made it more emotional - and, at the risk of oversharing - far more relatable. We stood together staring out across the stars, comforted by the low thrum of the Normandy, meditating on a relationship that could never be. It made Samara for more than a procedural notch on a bedpost - I’ve never been so glad to fail. Matt Elliott

"Mordin’s changing views of the Krogan reflect a dedication to the role of science in keeping the galaxy safe that you can’t help but admire."

For me, the most iconic moment in this series is a tragic one: Mordin’s death in Mass Effect 3. I usually have an affinity for the nerdy intellectual types, so the very model of a scientist Salarin was one of my favorite characters. Yet Mordin doesn’t quite fall into the expectations you’d have for a fast-talking medical geek. He’s musical, he’s funny, and he’s a reliable advisor to all the crew-members. Plus, Mordin’s changing views of the Krogan reflect a dedication to the role of science in keeping the galaxy safe that you can’t help but admire. His choice to sacrifice his own life to cure the Genopahge, humming Gilbert and Sullivan as he rescues an entire alien race, is the ultimate culmination of that logic. His death was the first time a video game made me cry, and I may or may not have gotten choked up just watching the scene again. Anna Washenko