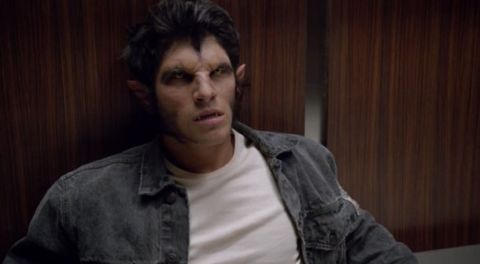 THE ONE WHERE The alpha pack arrives and the gang has growing pains of their own.

VERDICT After a long winter slumber, Teen Wolf returns with a promise of more action than ever. We were left with plenty of cliffhangers at the end of season two and it’s safe to say, there’s an abundance of anticipation when it comes to clearing up a few things.

Not that the opening, action-packed scenes does much answering; it actually raises more questions as the reasons why what’s going is going on are quite hazy. Isaac (Daniel Sherman) is mightily injured but a mysterious girl (Meagan Tandy) with motorcycle in tow barks instructions to enable an escape. We all know things are never that easy when it comes to Teen Wolf and soon, two wolfie-twins (Charlie and Max Carver) are on their tale.

After a motorcycle chase in what seems to be the longest alleyway in TV history and some seriously questionable CGI, all sorts of questions are thrown into the air. Who is this girl? Why are those two chasing them? Despite the special effects flaws, the episode perks up with a pretty great twins-turn-into-one-mega-wolf transformation. It’s gross but brilliant and proves once again that Teen Wolf often settes from some rough effects in not so crucial moments in exchange for one really well-delivered badass moment.

Talking of badass, Scott (Tyler Posey) – like most teenagers – decides it’s time for a tattoo. Stiles (Dylan O’Brien) is, of course, on hand to provide some light comic relief. Despite being only a few minutes into the episode, the actors have easily slipped back into their old ways and it’s brilliant to see such a charming Stiles. Holland Roden provides that very clueless Lydia appeal that we all knew and loved before she lost her marbles last season. Well, it seems the marbles are back and so are Lydia’s man-eating ways if the mysterious boy in her bed is anything to go by.

“Tattoo” plays a numbers game. We’re first faced with a deer crashing into Lydia’s car – an event that means Stiles, Scott, Allison and Lydia are forced into an awkward first meeting. Again, the effects are pretty bad but the work put into the aftermath makes the event look very real indeed. Back in school Lydia mentions a small bite from her little pooch Prada and before we know it, Teen Wolf have gone all Hitchcock on us with an epic classroom crow infestation. It’s a wholly surprising effort from the show and one that injects some impressive action without being too obvious.

Whilst we’re on the subject, this is an episode that packs some serious punch. There’s a brilliant elevator fight scene that – thanks to some clever camera angles and wonderful choreography – director Mulcahy effortlessly pulls off. He should be able to do this stuff with his eyes closed if we set our minds back to Highlander . Another impressive fight happens in the locker room between mysterious motorbike girl and a deliciously creepy new villain in the shape of Deucalion (Gideon Emery) along with his pack of alphas. Handling a broomstick like it’s nobody’s business, motorbike girl has a very Buffy -feel to her and the scene as a whole is wonderfully reminiscent of our favourite vampire slayer.

Surprisingly, despite Dr Deacon (Seth Gilliam) providing an intriguing cliffhanger towards the end of season two, he only makes a brief appearance in this episode. Moreover, the first appearance of Erica (Gage Golighty) and Boyd (Sinqua Walls) is a fleeting moment right at the very end of the episode. Well, let’s hope Erica is there too, as we’re only teased with a shot of Boyd’s clenched hand.

As a season opener, “Tattoo” done a fine job. After such a long break, it was always going to be difficult to re-engage the audience but Davis and Mulcahy have once again proven that they’re the dream-team when it comes to the shows best moments. There’s a whole host of new additions and some nicely executed storyline starters. Deucalion is especially intriguing as the new bad guy in town. Despite some over-acting and a few too many prolonged shots of bare chests, season three is off to the best Teen Wolf start yet.

TOO SOON? As Scott is getting his tattoo, Stiles jokingly asks if he’d like an inking of a Kanima-like creature.

LAUTNER-LOVE The twin-wolves aggressively tear their shirts from their chest to morph into the mega-wolf. Guess they’ll be dropping by to pick those up later then?

LEARNING IS COOL KIDS Ms Blake texts the whole class the last line of the book they’ll be studying before stating it will be “the last text you will receive in this class”. When did teachers get so high-tech?! The quotation, by the way, is from Conrad’s Heart Of Darkness .

BEST LINE Mysterious girl is whisked to hospital.
Girl: “Find the Alpha”
Melissa McCall: "What do you want with Derek Hale?”
Girl: “No… Scott.”