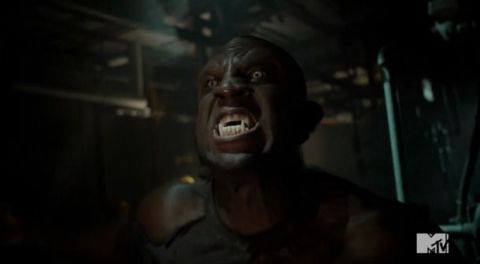 THE ONE WHERE Boyd and Cora are on the loose and a new type of killer threatens Beacon Hills.

VERDICT My, my! Teen Wolf has certainly amped up the horror stakes and seems to be settling nicely into its new gory ways. This week sees bloodied bodies, wolf-on-wolf action and hallucinations aplenty, making for another stellar offering from season three. This episode sees the series out of the safe hands of Russell Mulcahy and Jeff Davis and into those of Lucas Sussman and Tim Andrew. Thankfully, they prove themselves wholly capable, with more tension than you can shake a stick at.

The episode takes place almost entirely at night and opens with a couple of kids in the forest collecting fireflies (seriously, where are their parents?). What starts out as a jolly old time soon turns sinister as the little boy is faced with a snarling Boyd (Sinqua Walls). A chase ensues and as the kids hide out in a sort of shed, the tension is brilliantly depicted by director Tim Andrew, with plenty of sniffing and paused feet shots. Concluding with Boyd lifting the entire building over his head, you’ll be glad to know he doesn’t tear the two of them apart. Who knew Teen Wolf had it in itself to imply an almost murder of two young siblings?

Last week ended with a screaming Lydia (Holland Roden) and this week sees her returning to her season two nervous-wreck self. Now Lydia isn’t the most loveable of characters but you can’t help but feel sorry for her. The horrible happenings always seem to come her way and without any wolfie-ways or hunting skills, she doesn’t seem to cope very well. At least Stiles (Dylan O’Brien) has his witty one-liners to deal with all this supernatural stuff. This episode sees her stumbling upon a very graphic dead body at the local swimming pool – slit throat and all. Sussman did a brilliant job here by leading his audience into a false relief before shoving a bloody mess onto our screens. Erica’s dead body from last week has nothing on this lifeguard.

While the gang determine Boyd and Cora as the culprits, Derek (Tyler Hoechlin) Scott (Tyler Posey) and Isaac (Daniel Sharman) are still struggling the catch them. Despite their skills, there’s no way that the three of them can match Boyd and Cora’s full moon fastness, so Scott decides to enlist the help of hunting expert Chris Argent (JR Bourne). Despite giving up hunting for a more "normal" way of life, Scott manages to persuade him to help (with a little extra help from that dead body) and Chris slots back into his role as badass hunter with ease. It’s great to see that the writers haven’t forgotten about him, as they nicely slide him into this week’s storyline.

As Argent unpacks his array of wolf-catching accessories, a cleverly shot scene with Allison echoes the list. Like father like daughter, it seems she too wants to get back into the hunting swing of things. Scott and co decide to encase Boyd and Erica in the “of course it’s empty” school to save others from dying. Of course, it’s not empty and sees the return of episode one’s Ms Blake (Hayley Webb). Due to all the trembling in the corner of the supplies room after she spots Boyd and Cora, Ms Blake doesn’t really have much to say apart from a clichéd "Hello? Is anyone there?" Let’s hope the writers give her some more substance in the future.

Not wanting another dead body on their hands, Derek decides to enter the boiler room to fight off the pair. Even as the alpha, he’s no match for them and there’s an emotional scene that sees them tear through Derek’s torso. The overly-dramatic music can be forgiven, as Andrew’s choice of slow motion makes it a difficult watch and one that has us pleading for Derek’s life. Surely this can’t be the end for one of the show’s best characters? Well, you’ll be glad to know that the sun comes up just in time to save him.

This season seems to have a lot of hallucination versus reality. It makes for an interesting watch, as you’re not sure to believe your own eyes. This week, it comes in the form of bugs – lots and lots of bugs. Even if you don’t mind a few creepy crawlies, you will be seriously freaked out. It is horrible. They swarm the tent of a young lesbian couple who are embarking on their first intimate experience before one of them (quite rightly) freaks out, runs off and is ultimately pulled away by the insects themselves. The CGI is not too shabby either and makes for a truly shuddering experience.

The bodies start to pile up, as the girl from the couple in the woods is found tied to a tree, throat slit and head bashed - that makes for two really graphic bodies on show this episode. There’s also a gruesome discovery for Stiles as Scott’s mother pulls away a sheet in the morgue to reveal Heather from last week’s episode with exactly the same injuries. It suddenly becomes clear that Boyd and Cora aren’t responsible and there’s something else out there with a taste for virgins. “So if these aren’t random killings, what are they?” asks Scott. “Sacrifices,” replies Stiles, “human sacrifices.”

Sussman must be praised for a perfect build-up to an ever-exciting climax. The storyline execution is miles ahead of season two’s Kanima fiasco and effortlessly sets up season three. With less romance and more action, it seems Teen Wolf is finally growing up.

BEST BIT Lydia turns over a seemingly dead body in the swimming pool, only to find (to her relief) that it’s just a dummy. But oh no! There’s a horrifically murdered body just above. Smooth plot curve ball there, Sussman. Kudos.

WORST BIT As Stiles begins to realise the whole virgin connection, there’s a cringe-worthy amount of hazy flashbacks. Seriously guys, we get it.

GRADE A TEACHER Who in their right mind stays at school to grab classroom supplies at stupid o’clock in the morning? We’re looking at you Ms Blake. It’s your own fault for coming into contact with those wolves.

MANNEQUIN MURDER Did anyone else think the girl tied to a tree looked a teeny, tiny bit like a Topshop mannequin? Death by fashion disaster!

LOVE IS IN THE AIR Ms Blake can’t seem to resist a smoldering, chiselled Derek all covered in blood. Well, he did just save her life.

Scott: "Is there any reason why you’re still pointing that gun at me?"

Chris Argent: "I guess there’s still a part of me that wants to kill you."