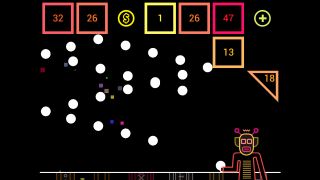 The perfect evolution of a basic, ubiquitous game

I'd like to think that we've all played it at some point. Whether you know it as Breakout or Arkanoid, you'd recognize the gameplay on sight: a ball bounces between bricks at the top of the screen and the paddle you control at the bottom, as you try to clear the field before losing your ball. And at some point, you've no doubt thought, Gee, it sure would be nice if I could just aim my ball directly at my target. That wish has finally been realized in BBTAN, an absurdly addictive mobile game that's occupied most of my public transit time for the past month. And whether or not you need something to occupy your fingers during travel, anyone can appreciate the stark cleverness of this ingeniously simple game.

Compared to all the flashy Clash-alikes that are always raking in money and heating up the app charts, BBTAN looks and feels like a touchscreen game from 1970. You play as an odd-looking alien who looks like a neon sign come to life - but really, your only form of input or control is the angle at which you fling your ball in a perfectly straight, clearly visible line from the bottom of the screen. Each time you do, a new row of numbered blocks is added to the field, with numbers indicating how many times you need to make contact before the obstruction disappears; if even one block reaches the bottom, it's game over. Occasionally, a special symbol will pop up. These might blast lasers horizontally or vertically, add another ball to your ever-growing chain of projectiles, or cause the ball to bounce off unpredictably. That's pretty much it.

But you'd be amazed at how alluring this simplicity is. BBTAN feels like the kind of game you'd be able to play effortlessly - and it pretty much is, at least in the beginning. But you'll eventually realize that there's an actual need for foresight and skill, including the ability to angle shots just so as if you're playing a hybrid of Breakout and billiards. This is also the perfect game to play while listening to a podcast; you don't miss much by turning off the pleasant little blips that accompany every impact, and the aesthetic of colored blocks against a stark black background is easy on the eyes, almost hypnotic in how straightforward it all looks. BBTAN isn't what I'd call exciting by conventional standards, but you'd be surprised at how tense it can feel when you need to make a certain shot or face the end of your run.

To add a little spice to what's essentially a simple broth, BBTAN also gives you the ability to unlock different types of balls through a toy capsule machine, which you can take a crack at by collecting coins with your shots or watching easily-muted ads. That's one of the best things about BBTAN: its ads are some of the least obtrusive I've ever encountered in a free mobile game, and there's no irksome BS to worry about like limited lives or a constant internet connection.

If you've ever downloaded a game to your phone, do yourself a favor and add BBTAN to the pile for the price of free. Whether it clicks with you right away or during a particularly long ride, I guarantee you'll be having a disproportionately good time with the game considering just how basic it really is. And hey, while you're at it - see if you can beat my high score of 162. It may not sound like much, but... well, you'll see.