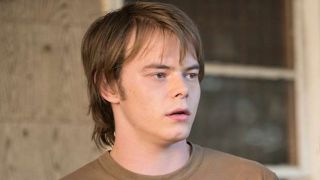 Time for a Cannonball! No, not the pool-clearing diving maneuver - the Marvel comics mutant. According to The Hollywood Reporter, Charlie Heaton - who plays Jonathan Byers on Stranger Things - will join the ever-expanding X-Men universe in the upcoming New Mutants film as Sam Guthrie; AKA Cannonball.

The spin-off - which has been described as a horror film set in the X-Men universe - has already nabbed Maisie Williams, who famously plays Arya Stark on Game of Thrones, as well as Anya Taylor-Joy, who made a splash with her recent performances in The Witch and Split. Williams will be playing Wolfsbane, while Taylor-Joy will take on the role of Magik.

Interestingly enough, this isn't the first Stranger Things star that's been keen to take on a role in the X-Men universe; Millie Bobby Brown auditioned for the role of X-23 in Logan, and though she obviously didn't get the part, she still calls it her best audition moment.