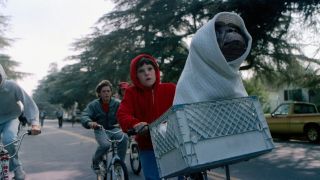 Steven Spielberg has revealed the untold story behind Harrison Ford’s cameo in E.T. The Extra-Terrestrial.

In an interview with Entertainment Weekly, Spielberg explained how he cast his Indiana Jones actor against type as a smug school principal. “He did the scene where E.T. is home levitating all of the stuff for his communicator up the stairs,” Spielberg said. “Elliot is in the principal’s office after the frog incident. We don’t ever see Harrison’s face. We just hear his voice, see his body. [Elliott’s] chair starts levitating. So as E.T. is lifting all of the communicator paraphernalia up the stairs, [Elliott] starts rising off the ground in the chair until his head hits the ceiling. Just as Harrison turns, E.T. loses control of the weight of everything and it all falls down the stairs, and [Elliott] comes crashing down to the ground, and lands perfectly. Four-point landing. The principal turns around, and as far as he’s concerned, nothing ever happened.”

Some hardcore E.T. fans may have already known about this cameo, and may have even seen it in grainy YouTube embeds like the one below:

“That was the scene that we cut out,” Spielberg said. “But that’s where [10-year-old actor Henry Thomas] got a chance to meet Harrison.” Thomas had seen Indiana Jones the year before, and Ford was his hero, so being able to meet the actor was a big deal. Yep, I totally get it, Henry. Wanting to meet the guy who played Han Solo and Indiana Jones? I think a lot of us are right there with you.

Check out the 30 most iconic Spielberg movie moments, or our review of E.T's 20th anniversary edition.