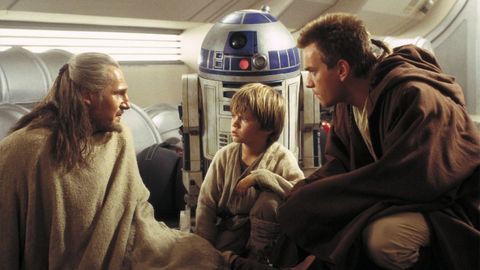 Believe the hype - this is worth the wait, so long as you don't expect a masterpiece. Better than Jedi, but not as good as Empire, Episode 1 should please both adult fans and pre-teen newcomers. Not exactly a great movie then, but still great fun.

Never has a movie been so intensely anticipated. Never has the media hype-machine been so well-greased for such an expectant public. Never has a film received a fanfare as loud as the one that's hailed Star Wars: Episode 1 - The Phantom Menace. And never have so many people been so ready for the bubble to burst all over George Lucas' face.

Initial US screenings of the Star Wars prequel drew a tepid response from critics, and one fan even claimed he'd wasted his life waiting for such drivel. The backlash was beginning before the film had even arrived at the multiplexes. But, after scooping more than $105 million during its first five days, there's no denying that The Phantom Menace made a massive impact.

True, it's hard for anyone to truly go in 'cold', what with all the coverage and pre-release merchandise that's already over here. But, once you're there in your seat - popcorn in one hand, drink in the other - and the intro begins scrolling to that theme, you'll shake off any cynicism and the small, hyperactive child in you will start yelling excitedly.

The simple fact is this is a fun movie that only dedicated Star Wars-haters will fail to enjoy on some level. It has the requisite amount of monster madness and laser-showered space-based dog fights, and the climactic showdown is everything you'd hope for, combining a pitched battle between skeletal droids and amphibian aliens, an off-world attack on an immense spaceship and a three-way lightsaber showdown.

So in terms of action this really is a case of bigger, better, more. Almost three-quarters of Episode 1 is digitally created, and while the virtual aliens and robots sometimes look a little too clean and crisp alongside their real-life counterparts, the sheer variety of freakish creature-support is amazing. Even more satisfying are the backdrops, which far outdo the lush visuals of, say, The Fifth Element, especially the bustling megatropolis of capital-world Coruscant, with its crowded skyways, spacescrapers and levitating landing-platforms.

But the theme-park-style fun reaches its peak in two particular scenes: first is the 12-minute pod race, which takes its cue from the speeder-bike chase in Return of the Jedi. This is cinema at the speed of sound, whizzing the audience around a bizarro Ben-Hur stadium while "pods" (sleds tied to giant thruster-engines) explode and crash on either side. The second is the lightsaber duel, which sees the diabolically cool Darth Maul (Park) taking on both Jedi heroes at once with his deadly, double-bladed laser-sword. Unlike Darth Vader, Maul is lithe and agile, and unlike Luke Skywalker, both Obi-Wan and Qui-Gon are fully trained Jedi, so the action is appropriately intense, incorporating several crowd-rousing acrobatic flourishes.

But this is by no means a perfect movie. The plot may not be as lacking as has been claimed (the scenes which deal with the politics of the Republic and the back-door shenanigans of a certain Senator Palpatine are surprisingly interesting), but it is clear that, after 20-odd years of refusing to direct, Lucas has not improved his actor-handling abilities. We all know that McGregor, Neeson, Portman, and Samuel L Jackson (who makes a brief appearance as a Jedi Master) are more than capable of delivering memorable performances, yet all appear stiff and uncomfortable here. Perhaps it's the hokey dialogue - or just the fact that, during filming, they were given relatively little to really interact with - but they certainly don't appear to be having as much fun as the audience.

Also, the scenes focussing on Anakin Skywalker (Lloyd) and Jar Jar Binks (Best) will irritate anyone over 12. It's not that Lloyd is especially wooden in the way that most kiddie-actors can be. Rather that he's been told to repeatedly shout things like "Yippee!" and "Wizard!" And the CG Binks (think a patois-jabbering Goofy crossed with a newt) serves no purpose beyond shakey, slapstick comic relief. Let's hope he meets with a little - shall we say - 'accident' before Episode 2.

If you're feeling picky enough, you could easily tear Menace to shreds. It's only a Meet the Gang set-up, with plot-holes, dodgy pacing, and possible racist undertones (the greedy Trade Federation speak in Japanese accents)... But that's the jaded, grown-up part of you talking. Relax, regress a little, leave your brain in the foyer, and you'll be guaranteed two hours of fantastic, fluffy, fun-for-all-the-family escapism.

Believe the hype - this is worth the wait, so long as you don't expect a masterpiece. Better than Jedi, but not as good as Empire, Episode 1 should please both adult fans and pre-teen newcomers. Not exactly a great movie then, but still great fun.