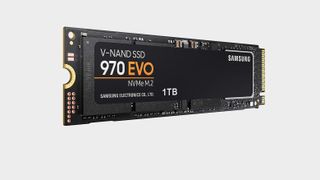 So you need some more storage, or maybe you're building a new PC. An M.2 SSD is a great way to expand your PC's storage capacity and potentially improve its performance. One of the front runners in this category is Samsung's 970 EVO SSD. Extra memory used to cost an arm and a leg, but thankfully, prices have galvanized somewhat and are likely to drop considerably during Black Friday. SSDs have largely replaced conventional "spinning-platter" HDDs in the PC gaming space, largely due to their vastly increased transfer speeds. So if you haven't upgraded at least one of your drives to take advantage of the SATA interface, you're likely seeing only a fraction of the performance your PC has so offer. Here's everything you should know about the Samsung 970 EVO SSD.

While the price of this expansion depends on the size of the storage you need, we'd recommend going with 1TB or more. Unlike with more traditional SATA SSDs where you can stack as many as six into a single machine, you may be limited to a single M.2 slot depending on your particular motherboard. A single TB will typically cost around $200 but can fall well below that on a fairly regular basis.

Besides the cost, the most important stat to look at here is the sequential read/write speeds, while the real-world performance can vary slightly, NVMe drives like the 970 EVO are rated to achieve speeds of up to 3,500MB/s and 2,500MB/s respectively. That means that any pre-sorted data on you have on your PC is being retrieved several times faster than a conventional SATA drive, and when you consider that this is what your PC relies on to determine load times for your games, the utility for this drive becomes quite apparent.

Should you buy the Samsung 970 EVO? If you do most of your gaming on your PC, the short answer is yes. And even if you only use your computer for productivity applications or browsing, your PC's performance can still benefit greatly from the addition of an M.2 SSD. There's a reason this has become one of PC Gamer's top picks for the best SSDs for gaming.