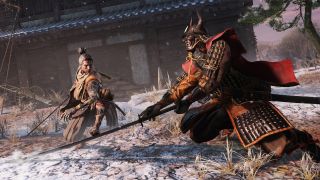 Hidetaka Miyazaki has made some of Edge's favourite games of all time, but for all that his output sits among the best of what this medium has to offer, in many ways it also embodies some of its worst traits. There is often a certain sneering elitism associated with his games, as if their devotees belong to a special club, only for players of pure blood and elite skills. The 'git gud' meme is one of gaming's most wearying. Sekiro frequently feels like it is embracing it in a way none of its spiritual predecessors did.

A hot-tempered debate sprung up online shortly after Sekiro's release, after it was suggested that perhaps Miyazaki's games should come with a difficulty setting. To the elitist crew, that was heresy, and in fairness you can sort of see their point. The reason FromSoftware has transformed from the Armored Core team into one of the world's most revered studios is because of the respect its games have for their players; in an era where so many new releases are terrified of the player getting stuck, and go out of their way to make things as straightforward as possible, a game that is unafraid of making you struggle is a precious thing indeed. The thrill of a Miyazaki game is watching as something that once seemed impossible finally dies to your sword, axe or staff. The journey to triumph is long and painful, and all the more rewarding for it.

Think of the hardest struggles in your own personal Soulsborne journey. When you were bouncing your head off Ornstein and Smough, that infamous Dark Souls roadblock, night after night, what if the game suddenly offered to drop the difficulty level for you? Would you have taken it? We think we might have, honestly, especially if we had a review deadline breathing down our necks. Say you agreed, and then won first time. Would you feel the same thrill you normally do from finally overcoming a FromSoftware boss? Or would you feel like you’d cheated a bit – and had in turn cheated yourself out of one of the finest feelings gaming has to offer?

Back to the grind

This is the central argument against the notion of adjustable difficulty in FromSoftware games. Yet it also overlooks the fact that, until now, the studio's work has effectively let you adjust the difficulty on the fly. Spend an evening running laps of a well-known XP farm and you can overlevel yourself for the fight you've been struggling with. Go on a titanite scavenging mission and you could upgrade your weapon; spend your rank XP smartly and you could make it more powerful still by levelling the character stat with which your weapon’s damage scales. Certain items and spells can buff your weapon even further (and many enemies have elemental weaknesses to exploit). If all else fails, you can summon a couple of helpers. Sure, the boss will have more health, but there'll be three of you.

In other words, Miyazaki games have long had a sort of adjustable difficulty; they’ve just made you work for it, which is entirely in keeping with the spirit of the thing. Similarly, it's appropriate for Sekiro to work alone, since that is the shinobi's way of life. He is a  lone warrior serving a sole master, and any co-op summoning would cleave the game's fiction in two with a sharp katana. Yet by opting to make a pure action game, rather than an RPG, FromSoftware has also ripped out all the other ways previous titles from the studio let players tip the odds in their favour – there's no levelling, no weapon upgrades and if you want to raise your stats, you have to beat those bosses. Some of the most beloved games in this genre have customisable difficulty, and their reputations have not suffered (one of them has two Edge 10s under its belt). But Sekiro stands firm. The result is all the more thrilling when you’re winning, but when you’re not it can be crushingly demoralising.

The result is that, logically, players are more likely to bounce off Sekiro than they ever were to abandon Souls or Bloodborne. And, anecdotally at least, it seems there is more than one likely point in the game at which people throw their hands up, put their pad down and walk away. The most common is Genichiro Ashina, a boss who sits at roughly the halfway point of the game and is effectively an exam, ensuring you've learned all you need to before the game will let you pass into the real hardship. It is the point at which the game either clicks or comes apart for players. But we know of several Souls veterans who didn’t even get that far before giving up on the game. That in itself suggests something isn't quite right.

That review code was only made available 72 hours before launch implies FromSoftware wanted as much time as it could have with the game; perhaps it could have done with a little longer to fine-tune how much it asks of you. The developer has, in the past, trod lightly when it comes to post-release patches, yet we wonder whether it might think differently this time around. For all the delicious irony in From partnering with one of the world's mightiest publishers to make its hardest game to date, we can’t help but suspect that this wasn’t quite the plan all along. And if it was, Activision might have something to say about it. But if patches do follow, we'd be surprised if difficulty settings were added as part of that. And, to be honest, a little disappointed if it did – not because it would mean one of this industry's most revered creators compromising the purity of his vision, but because we just don’t trust ourselves not to use them.

This feature first appeared in EDGE Magazine. For more excellent features the one you've just read, don't forget to subscribe to the print or digital edition at MyFavouriteMagazines.