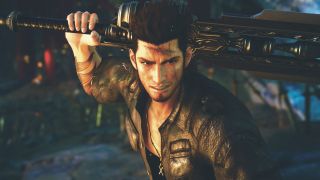 Final Fantasy 15 is clearly unfinished, but no game has got under my skin this much in years. Despite a strong first half that successfully simulates the experience of taking a road trip with a good group of friends, the second half of the game sticks you on a linear path through a partly complete continent you only ever get brief snapshots of. Loving FF15, then, takes a certain kind of resilience and investment in its four main characters. I am apparently one of those people.

Post-launch, it’s been my hope that FF15’s DLC and updates could make it feel a little more finished. It’s instead a halfway house. Extra parts of the environment are accessible now, after updates, and an additional episode was added to help clarify the game’s ultra-thin story. Meanwhile, limited- time hunts and events have made it feel slightly more like a living game. It’s not quite the same as the main story feeling totally complete, but it’s also pleasing to know the journey isn’t entirely over yet.

FF15’s DLC promises something slightly unusual. Instead of building on the main story, it instead spotlights each of your road trip pals: Gladiolus, Ignis and Prompto. The first, focusing on Gladio, separates the party’s heavy swordsman from the main group as he seeks to acquire more power in order to aid Noctis. He ventures into what is basically a portal to hell to face Gilgamesh, a master swordsman who’s existed since the world’s age of gods. This two-hour DLC is his effort to earn the title of ‘shield of the king’, a mini-pilgrimage that gets a little deeper into the character’s purpose as a royal bodyguard.

Gladio heads there with Cor, (who briefly appears early in FF15’s main story) the only human who has ever faced Gilgamesh and survived, taking the guy’s arm off and therefore earning his mercy. While FF15 is a road trip between friends, Gladio and Cor’s journey to fight Gilgamesh is one of two soldiers of different generations, who have sought a dangerous enemy in order to protect their respective kings. FF15 has its four characters warmly interacting and sharing meals at campsites on the road; Gladio and Cor merely eat Cup Noodles together in stoney silence, which is odd and sweet in its own way.

This expansion retools FF15’s combat system around Gladio, focusing more on skill, dodges and combos than the main game, rewarding you with multipliers and powerful bonus moves. The showdown with Gilgamesh doesn’t disappoint, either, placing Gladio on a precarious bridge covered with the swords of this immortal’s fallen enemies. There’s perhaps not quite enough meat on these bones as a two-hour appendage to a 100-hour game, and I wouldn’t recommend buying this episode unless you’ve already finished FF15. As part of a £20 season pass, though, those who feel like they know these characters will value seeing a little more of them.

Episode Gladiolus ends on a teaser for the next episode, focusing on Prompto. It shows FF15’s photographer wandering up to a man lying seemingly near death in an enormous field of snow, raising his gun and pulling the trigger. At FF15’s launch, some savvy players found a way to glitch out of the maps in the second half of the game and go exploring the unfinished second overworld for secrets. They found a very similar, gigantic snowy area. My hope is that Square Enix’s designers are using these extra episodes to show us parts of the game they didn’t have time to finish in time for launch. But even if they’re not, I’m happy that this sincere if superficial RPG can continue in some form, with such a memorable cast of virtual pals.