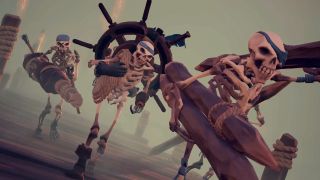 Cursed Sails, the second major update for pirate sandbox game Sea of Thieves, is now live. Free and available to all, it features a bunch of new content to enjoy and ways to interact with your fellow freebooters (that's old time-y slang for pirate). Here's the teaser:

As is par for the course, it doesn't really tell us much (they don't call these things "teasers" for nothing). So what does Cursed Sails actually mean for you and your crew? Read on and we'll break it down for you.

Skeleton ships have begun to surface, and carry rewards

In the launch version of Sea of Thieves, the undead were a common, yet distinctly landlocked, enemy. Not so anymore. Sailing the high seas you'll now find AI-controlled enemy ships, manned by literal skeleton crews. This finally gives players something to fight against other than giant monsters or each other while out amongst the waves, a much-requested feature. And if you should manage to sink one of these unholy galleons, you'll be able to loot cursed cannon balls, which pack an extra-powerful punch.

Sea of Thieves is meant to be a sandbox experience where players make their own fun. But sometimes it's nice to have a bit more guidance and enjoy something that feels more hand-crafted. Cursed Sails adds a three-week long campaign that digs into the mystery of the aforementioned skeleton ships, with new goals to achieve and items to unlock arriving each week. Note that although the quests you'll undertake are temporary, the rewards are permanent.

So maybe you don't have the crew needed to man a full-size galleon. Maybe your idea of a perfect night among the thieves is yourself and two buddies. What you need is the Brigantine, a new ship that accommodates three pirates. This boat falls neatly between the Galleon (which is a slow turner but powerful and is ideally operated by four players) and the Sloop (nimble but lightly armed, with a max crew of two).

Alliances help you keep track of who's on your side

It might be tempting to just attack any and every player you come across in Sea of Thieves, but sometimes it helps to join forces. "The enemy of my enemy" and all that. Although players could cooperate before, the new Alliances feature makes playing together official. When you meet up with another crew and from an Alliance, your ships will show up on each other's maps and loot will be split between crews. And for you scurvy dogs out there, don't worry - Alliances can indeed be broken should you feel like keeping all the treasure for yourself.

Along with these changes, Cursed Sails adds plenty of cosmetic items (which you can earn from the aforementioned limited-time campaign or buying from merchants outright) and a bevy of bug fixes. So raise anchor and go fetch some precious booty already.

Want to know how to earn gold fast in Sea of Thieves so you can buy that fancy treasure you've got your eyes on? Check out our guide!