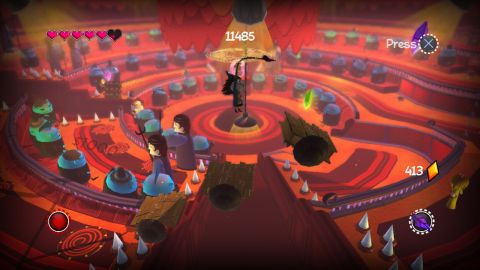 Ninja jumberjacks. Howling plant-life. Spider-beasts that spray radioactive neon diarrhea. Psychedelic onions that teach you kung-fu when eaten. Scarygirl has it all and much more. Each deliciously bizarre encounter adds to the charm found throughout this dark, fantastic storybook realm. But for a game about a dead little girl with a hook-adorned tentacle and a gnawed off bone stump for arms, Scarygirl sure does marry its overt strangeness with some rather plain-Jane old-school platforming.

Plagued by strange dreams and spurred by her moustached octopus pal, Scarygirl heads out into the spooky realm beyond her little cottage to find out what’s causing the Tree of Life to shed its leaves. The journey’s tale is of little consequence, save for the wondrous environments and crazy creatures you encounter along the way. Exploring and brawling sends you through densely tangled forests, sewage-encrusted mechanized crusher pits, jagged ice-covered mountaintops, and even a multi-story dive bar painted in bright hues of orange and yellow. Each off-kilter setting is a tad warped in its own way, and the 2.5D stage designs give the exotic landscape added depth and personality. When you throw in wacked-out beasties like a purse-toting squid creature wearing a helmet that’s painted to look like the head of a human lady, for example, Scarygirl really stands out as one of the more visually impressive and creatively designed downloadable offerings in recent memory.

In contrast, the platforming and fist-swinging is not quite as memorable, which is surprising, considering Scarygirl is a versatile combatant. Her single usable arm swings around in a flurry as you deliver wild attack combos, and grappling stunned foes lets you use them as melee weapons, squeeze them until they pop, or fling them as missiles. The tentacle-claw also doubles as a grappling hook for swinging and a propeller to let her hover across gaps, making navigation a little easier. Scouring the landscape for gems to spend on more upgrades lets you unlock more powerful attacks, including a cool move that summons giant octopus tentacles to smash your adversaries with. Sadly, even with all the options at your disposal, combat is far from smooth.

Having a comrade hop-in for some local two-player co-op action lets them play as the kung-fu bunny dude from the game’s tutorial. Aside from leveling things out a bit in battle, this support character is fun to play too, as he’s quicker, has different moves, and can shoot psychic fireballs.

Scarygirl isn’t a total disappointment. Sure, the combat isn’t its strongest suit, and being steamrolled time and time again by the tough battles later in the game gets old, but it’s hard not to be drawn in by this curious cartoonish realm and the weirdos who live in it. This highly imaginative and beautiful game redeems itself with quirky creativity when its mechanics occasionally fumble.